Golfers, Leave That Flag In!

Ever since I started playing golf, I didn't quite understand why people took out the flagstick when they were off the green. Whenever golf announcers saw a pro pulling out the flag when off the green, they would always comment that the golfer was trying to hole it. But they would never offer any logical reasons.

I could understand wanting to pull the pin if it wasn't straight in, but not otherwise. To me it makes sense that you would want the stick in the hole to use as a backboard if the ball approached the hole too fast. However, I didn't question the widely-held pin-pulling practice since golfers much more accomplished than myself believed in it.

Thankfully, Dave Pelz, the mad scientist of golf, researched the effects of the flagstick on balls approaching the hole. He finally set the record straight, "Leave the flagstick in whenever the Rules allow, unless it is leaning so far toward you that the ball can't fit." I can finally sleep at night and write a golf blog without worry.

We all know about the incredible feats of the wunderkid, Michelle Wie.

Her full swing is the truly amazing thing about this golf phenom. It wouldn't be a stretch to say that she already possesses the best full-swing of any woman today. She just needs to work on her short game and putting to start winning on a consistent basis.

But how does her swing compare to those on the PGA? Quite well, actually. I'm no swing expert, but I would argue that Wie's swing is more mechanically sound than most PGA pros. In fact, Wie's swing compares very well to that of Ernie Els: 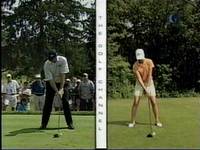 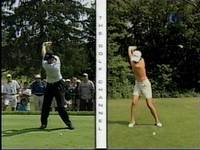 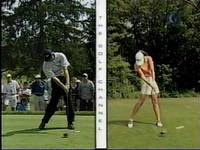 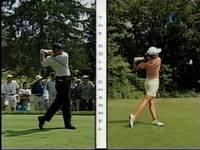 Phil Mickelson and the Dark Side of Golf

If you're a loyal reader of this golf blog (that's you mom), you'll know that I've never been a fan of Phil Mickelson. Nor have I been a fan of Callaway clubs.

So it's only appropriate that the two have joined forces. Word going around is that Mick tried to renege on his multi-year contract with The Acushnet Co. (parent of Titleist, FootJoy, etc.) just like David Duval did in 2001. Phil demanded more money based on his success this year with his first major win. Instead of feeling indebted to the company that developed the tools to produce his first major win, Mick felt that Acushnet owed him.

So Mr. B-Cups bailed out on Acushnet and promptly inked a much more lucrative contract with Callaway. Rumors estimate that Callaway will pay Phil somewhere between $3 - $6 million more per year than the Acushnet deal. My old math teacher always used to say, "greed is a sickness" and it seems that Mick has come down with a very big case of it. However, Phil would rather have you believe that he signed with Callaway for their equipment. In a press release, Phil proclaimed "to help me achieve my ultimate goal of becoming the No. 1 player in the world, I felt it was necessary to switch to the exciting new driver and golf ball technology from Callaway Golf."

It's clearly evident that Darth Mick has now fully embraced the Dark side. Is this the final act of Phil's long pattern of self-absorption and idiocy? Not a chance. Look for Phil to resume his climb from #3 to the top of ESPN's "Worst Choke Artists." I think that it would only be fair that Callaway reneges on Phil when his game tanks. Somehow I think that will happen sooner than later.

But kudos to Acushnet for taking a stand and not succumbing to another money grubber's demands. Acushnet has a long reputation for its commitment to produce the highest quality golf equipment from head to toe. By rebuffing Phil, Acushnet sends a message that no golfer is larger than the company or its products. On the other hand, Acushnet is known for its generosity. When news surfaced that Moe Norman, the legendary ball-striker, teetered on the brink of financial ruin, Acushnet stepped in and offered Moe a $5,000 monthly stipend for the rest of his life. But what did Moe have to do in return? Nothing, it was a thank-you gift for his prior accomplishments. Sadly, Moe passed earlier this month, but I'm sure that his last years were more comfortable than otherwise thanks to Acushnet. I have always been a huge fan of Acushnet, but never more so than now.

Over the years, golf has developed it's own language. Banana ball, flub, gimmie, worm-burner, and "You da man!" are just a few of the terms and phrases born from the game of golf. Often, these terms spawn subconsciously while on the golf course or in a golf blog.

Such was the case two weeks ago. My good friend Andrew was in town for a week. Living in Japan for the past several years, Andrew was dying to get out on the links for a good dose of golf. So we played a couple of rounds at Brookside, my home course in Los Angeles, CA. He's a very good golfer, but just a little rusty due to inactivity.

Although Andrew's been out of the country for a while, he still understood the complex meaning of that spontaneously coined two-word phrase. By themselves, these words are rather straightforward. However, when combined, they produce a sophisticated meaning that conveyed the precise location of his ball. He knew that his ball ventured so far right, it landed somewhere in the rough on the next hole. He also knew that his ball settled into a horrific lie behind a wall of trees.

As I walked up to my ball in the middle of the fairway I looked up and spotted Andrew in the distance addressing his ball. Man, being "Tiger right" really sucks.