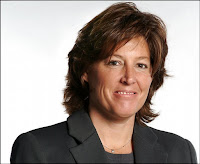 A couple of weeks ago, a friend of mine emailed me an article written by Sally Jenkins about Tiger Woods' post injury return to golf.

What shocked me most about this article was the writer's prematurely drawn conclusions about Tiger's golf game. Just read this passage:

But so far, Woods's comeback has been a relatively humdrum event...After an eight-month layoff to repair the anterior cruciate ligament in his left knee, Woods missed dozens of putts and seemed frustrated by the slow pace of the whole affair. All of which was a reminder that the injury is a clear demarcation in his competitive life: He's now 33 years old and in the last third of his career, and while he surely has a lot of greatness left, the game may no longer come so easily.

At the time that the article was published, Tiger had been out of competitive golf for almost 9 months and had logged fewer than 6 competitive rounds, 2 of which were match-play shortened and didn't require putting out. That's right, the writer believes that this sample size is sufficient to derive meaningful conclusions. Anyone who plays golf regularly at any level knows about the fickleness of golf and how maddeningly long it can take to recover one's form after a sustained layoff. Just because Tiger is a little rusty, it certainly doesn't mean that he's lost his game. To make that kind of jump is just regoddamndiculous!

Yet the writer has seen enough to proclaim, "For the first time in a decade, Woods will enter the Masters at Augusta National as something less than the clear-cut favorite." Oh brother!

But it doesn't stop there. The writer later suggests that Tiger may never recover his putting touch:

Oddly, the thing that seems most affected by the long layoff is not his swing...but his putting...But his trouble was perhaps a glimpse of what to expect when he gets older: Other greats who were nervy, aggressive putters, such as Arnold Palmer and Tom Watson, saw their touch desert them in their mid-30s, and struggled to ever make short putts again.

All golfers know that putting is one of those things that is highly variable over the short term. The fact that Tiger's putting game was off for 6 rounds is hardly surprising. The writer seems to have forgotten that Mickelson's putting blew all year until he won at Riviera. Tiger is arguably the greatest clutch putter of all-time and I'm sure that he'll regain his putting sooner rather than later. Oh, and don't believe the writer. Tiger is the clear-cut favorite at Augusta.

There were a couple of important things we learned from the 2009 CA Championship at Doral Golf Resort & Spa:
Most people don't know about #3 because it didn't make the television broadcast. But luckily for us, an alert shutterbug was able to capture the moment in pictures! 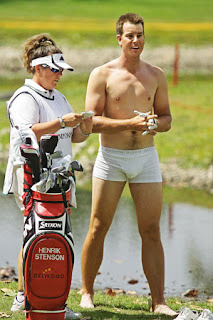 Apparently, Stenson stripped to his skivvies to avoid soiling his clothes from hitting out of the water hazard. But c'mon, doesn't he get those stylish threads for free anyway? Surely he could have borrowed Fanny's caddy bib. Maybe Stenson signed with a new underwear sponsor that demanded more exposure. On second thought, I think he was simply looking for a good excuse to show off that professional athlete bod of his. Golf is a sport, right?