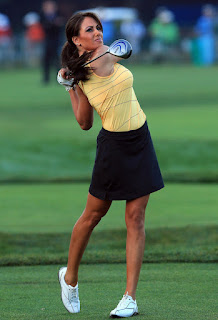 Ask any random dude on the street, "Who is the hottest woman in golf?" and I bet 99.9% of those that can actually come up with an answer will name Natalie Gulbis. Ask me that same question, and I'll name someone that I bet 99.9% of all guys have never heard: Holly Sonders.

After watching the Golf Channel over the last year, I have finally concluded that she is indeed the hottest girl in golf. Originally slated for the eye candy role on the daily live golf talk show "Morning Drive", she has been making the rounds on other Golf Channel shows such as "Golf Channel Academy" and "School of Golf". Like a master chef using just a bit of saffron to complete a gourmet dish, the programming big wigs at the Golf Channel use Ms. Sonders to spice up otherwise bland shows.

At first I thought that she was just another pretty face with a smile that rivals the Cheshire Cat, but she's actually an excellent on-air personality. She is smart and articulate and speaks with a sweet and pleasant voice. She's a natural in front of the camera and can handle the unpredictability and pressure of a live show. And to top it off, she's a legit golfer. Just check out this video from the 2012 CVS Caremark Charity Classic shot by my friends at Golfwrx:

Along with Win McMurray and Lauren Thompson, the Golf Channel has assembled quite a bevy of golf babes for us to feast our eyes upon. After watching the NFL Network, it's obvious that they could learn a thing or two from their dimpled, white balled competitor. But of course football is interesting enough that eye candy would just be a distraction!