Is Phil Mickelson a Cheater? 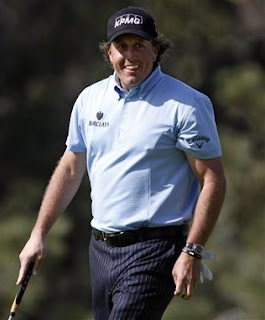 Phil Mickelson has long been rumored to be one of the least popular players amongst his peers on the PGA Tour. But now his popularity is dipping to new lows over his use of 20-year-old Ping Eye2 square-groove wedges that sidestep the new groove rule. "I don't like it at all, not one bit," Rocco Mediate said. "It's against the spirit of the rule...We have to get rid of those clubs, because they're square grooves - what else can you say?" According to Scott McCarron, "It's cheating, and I'm appalled Phil has put it in play."

Readers of this blog know that I'm no fan of Phil, but in this case I believe that he's getting unfairly crucified. In my opinion, it's perfectly fine to play golf with anything that the USGA deems to be legal. Heck, if the Iron Byron was legal, I'd be the first to use one. Since all square-groove Ping Eye 2 irons manufactured before April 1, 1990 are legal, Phil didn't do anything wrong by putting them in the bag. The USGA agrees. "The clubs are usable where USGA rules apply," said Dick Rugge, the USGA's senior technical director. "The rules speak for themselves and show it's not cheating to use them."

So the critics of Phil need to back down. He's certainly not cheating. If people have any beef, they should redirect their rage at golf's governing bodies. But more interestingly, I think that this controversy sheds light on other issues. For instance, what does all this say about golf club technology? The message I get is that 20-year-old technology is better than that of today. I've long believed that iron performance improvement through technology is limited and this is further validation. My conviction was so strong that I put a set of Mizuno MP-14s in my bag about a year ago. These irons are about 18-years-old and play just as well as my much newer Nike Blades. I'd hate to work in the marketing department at any golf club company when consumers watch that the pros are opting for clubs made two decades ago!