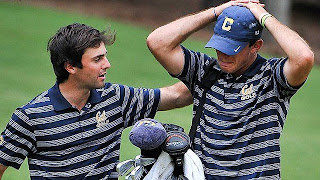 Match play is an exciting golf scoring format. It turns golf into a mono y mono contest where the winner is determined solely by the number of holes won. There's no bonus for the margin of victory on each hole, just one point is awarded for each hole won. As a result, it is "the great equalizer" and has proven to produce far more upsets than the standard stroke play format. In basketball, the NCAA Basketball Championship is known as "March Madness" due to the crazy number of unexpected upsets. But it can't hold a candle to match play golf. The Wall Street Journal compared the winning percentages of higher seeds in golf's WGC-Accenture Match Play Championship to March Madness. They found that the higher seed in basketball won 72% of the time compared to only 60% in golf.

So it's fairly obvious that the match play format sacrifices a bit of fairness for excitement and suspense. It's rare that the player hoisting a match play trophy is truly the best golfer in the field. Perhaps that's the reason there's only one match play tournament on the PGA Tour. But it also makes you wonder why the NCAA added match play to the Men's Golf Championship in 2009. Isn't this the final tournament of the year with the sole purpose of identifying the best team in college golf?

The tournament's current format is 54 holes of stroke-play followed by a match play playoff among the top 8 teams. As one might predict, the format is producing unpredictable results. Of the five tournaments so far, four of the #1 ranked golf teams have been upset. But this year's 2013 NCAA Championship featured the biggest upset of them all. Cal was the best college golf team this year and perhaps all-time. Just check out these fun facts:

If this doesn't cast a bright spot light on the deficiencies of the match-play format, nothing will. It's simply not fair for a team that has proven all season it is the best by a wide margin to have it all come undone over several hours of random heads-up golf. Under a conventional 72-hole stroke-play format, Cal would have rightfully run away with the title. Every competitive golfer knows that stroke-play is the best overall test of golf. Heck, it worked for the NCAA Championship for the 44-years prior to 2009. It's clear that the NCAA's effort to spice things up with match-play has been a failure and diminishes the legitimacy of the title. After Illinois upset Cal, Desimone said, “All today does is demonstrate again that this is not the best way to crown the national champion.” It's just a shame that arguably the best college golf team of all-time will fade into obscurity due to a poorly conceived championship format. In this regard, match-play is truly upsetting.