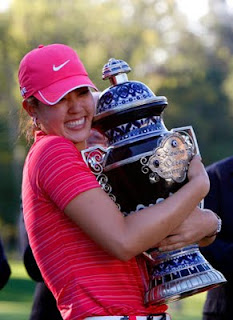 Well, it finally happened. Michelle Wie actually won a legitimate professional golf tournament. It occurred at the Lorena Ochoa Invitational over some of the top women golfers in the world.

While I've always thought that Michelle would win on the pro circuit someday, I didn't think that it would take this long. I had some serious doubts a couple of years ago when her pursuit of distance to compete with the dudes led to some questionable swing changes. But her Ernie Els-like swing of old returned last year and she was able to go flag hunting. She was competitive in many tournaments before her breakthrough win.

So what now? Obviously, it is a tremendous weight lifted off of her shoulders. The kind of pressure to win this kid must have built over the years must have been absolutely maddening. With every loss the PSIs were raised a notch. But the relief of winning must have been equally euphoric.

I think that the boost to her confidence from her first win could propel her to multiple win seasons in the near future. LPGA majors are certainly part of the picture. Why not? Have you seen the names of the recent winners of LPGA majors? Since Annika left, it's a who's who list of "who?". Over the last 3 years, the World's #1 Lorena Ochoa has taken only 2 majors. The rest are players likely to be unrecognized at my local muni. Clearly, there's plenty of opportunity for Wie to win majors in the current competitive landscape. We'll see what happens, but I'm sure that it will interesting to watch regardless. Good luck Michelle!