They say that absence makes the heart grow fonder. Well, that couldn't be more true for me this past weekend when there was an absence of CBS golf coverage.

Why you ask? Well, who doesn't get a chuckle or two out of David Feherty's and Gary McCord's witty comments? But the real reason is CBS' super-slow motion "SwingVision" swing analysis feature. It's the coolest thing in golf broadcasting since...well let's be honest, there haven't been that many cool innovations in golf broadcasting ever.

SwingVision takes slo-mo and kicks it up a notch. It's able to capture the full golf swing at an astounding 1,000 frames per second (fps)! But what really makes it cooler than other slo-mo features, is that there is a camera solely focused on the ball at impact. You know how they say to "hit down" with your irons? While it's true, it's probably one of the hardest things to comprehend in the golf swing. I know that it took me a very long time to fully understand the concept. Well, it is instantly understood when you see a close-up of Tiger's 7-iron (my guess) spanking the rock on a descending path and then clipping a shallow divot in textbook fashion: 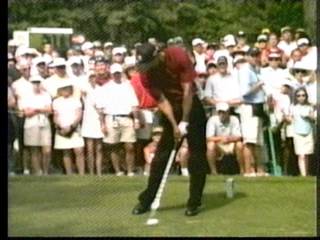 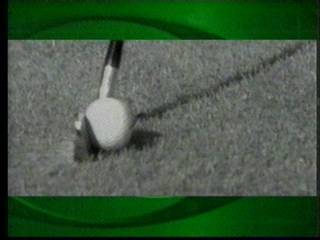 SwingVision is a great feature that tremendously improves watching golf on TV. I only wish that CBS used it more. And why not? I mean, there's usually enough downtime during a typical golf coverage to fit in a full-length feature film.

Anyway, if there's enough interest, I can try to dig up some more SwingVision screen shots. I think I can get screenshots of Tiger and Els hitting the driver. Please leave comments of what you want to see, and I'll see what I can do. Stay tuned.

P.S. Here's the video of Tiger hitting iron off the tee:

The following are some additional SwingVision-related posts on Grouchy Golf. Eventually, I'll have all the videos available for you to enjoy, so be sure to check back in the future!:

In addition, check out the Eye of the Tiger. It is a great video that gives you an idea of what Tiger Woods sees when he makes his super swing!

I tried to find information about swingview on the web but didn't find any. Can you help me? I also would like to use a feed of your blog.
Oliver

Please write me an email (heuler AT gmail DOT com)

I loved Swingvision immediately as well. One telling sequence was of someone who hit a push slice. You could see the face open ever so slightly on impact. Swingvision is great for sand shots too.

If the above pic is his 7i then it just re-affirms how important it is to hit down for distance. His 7i is more like a 5i in that pic.

How about Pam Anderson hitting down on two balls.

thanks for posting that video of tiger. I wish I could see the Johnny miller swingview with the 30 cameras that was mentioned

Swingvision is terrific, Grouch, but what ever happened to ABC's breakthrough many years ago at the U.S.Open when they had a low camera angle on tee shots that actually kept the ball in focus from tee to fairway! You could watch it slice or hook, low or high. It was amazing and great viewing just like watching your buddy hit his tee shot but for some reason they stopped doing it - maybe they shipped that camera down to Cape Canaveral to follow the space shots.

If you have ideas for SwingVison there something you can do. CBS is asking for your imput of what you would like to see on SwingVision. Go to : https://www.sportsline.com/golf/golftips
Fill out the form and maybe it would be picked.

They used the same thing for the Australian Open (Tennis) and the One Day Cricket Tri Series. Amazing to watch how much the racquets and bats actually move when they strike the ball.

This will help instructors/instruction so much.

Hope you don't mind if I link to it.

Sorry, I don't have any long iron clips.

While you still hit the ball with a descending blow with the long iron, it is not as steep as with shorter irons. At most, your long iron should make a very shallow divot after contact with the ball. A deep divot indicates that the club path was too steep.

The loft of the long iron combined with the shallow angle of approach will generate the proper launch angle and backspin to get the ball airborne. However, striking a long iron properly takes a lot of precision. It is definitely the hardest club to master.

I understand a little more now. I was probably hitting too steeply, will try a shallower angle now.
Yup, the long iron is much harder to hit than a hybrid, but it looks much better than a hybrid... :)

Thanks for your help.

I should add I also have great video (also SwingVision) of the hitting down action of a driver, which refutes the myth that you are supposed to hit up with a driver. If you would like me to email it to you send me an email (hitdown@telus.net).

When I finally decided that i would dedicate time to learn golf, I wanted to learn the "classic" swing, researched fairly deep for a newb, and settled on Mizuno MP-69 for my first set of clubs (how can i use game improvement irons when i have no game?)
I tried two different schools (PGA Tour store, Hank Haney) but didn't trust the instructors (too much snake oil, not enough substance) and decided to teach myself.
After 2.5 years, I have learned how to hit these irons. Not consistently, but it's not because of the clubs, it's my own faults (tight grip, rushed downswing, trying to kill it, not keeping my head down, not finishing the swing...). Though i'm a high handicapper, i am pleased with my progress. And yes, i have reconsidered my decision more than once, but remain committed to this method for self instruction. There are no shortcuts. I've learned more from just observing the high school kids practice at my home course than any one ever taught me.