As I have stressed before, proper golf fundamentals are the key to a solid and repeatable golf swing. I've already covered the golf grip, and now I'd like to address ball position. There are a couple of different teachings in this area and I've experimented with most of them. The one that has worked the best for me is the Jack Nicklaus method of ball position.

According to Jack, "I play every standard shot with the ball in the same position relative to my feet. That position is opposite my left heel."

...ball position is very, very important. That's why I like you to think of a constant ball position. Always position the ball off the logo on your shirt. If you don't have a logo on your shirt, position the ball in line with your left breast. The only thing that changes is the width of your stance - - where your right foot widens out farther the longer the shaft of the club gets.

If you think about it, if I was hitting a wedge shot, it would look like the ball was pretty much in the middle of my stance. Yet, if I was hitting a driver, you would have thought that I moved the ball way up in my stance. But really nothing has changed. All I've done is widen my stance out for the different clubs. This means that my alignment stays the same and my shoulders stay square the target line...

I used to try to play everything from the center of my stance, but the constant ball position method worked much better for me. In fact, it is the preferred method amongst professional golfers. According to studies done by ModelGolf, tour players actually do move the ball in relation to the front foot from the 2-iron to the 9-iron, but the movement is so small that, for all practical purposes, the ball position in relation to the front foot remains almost constant. 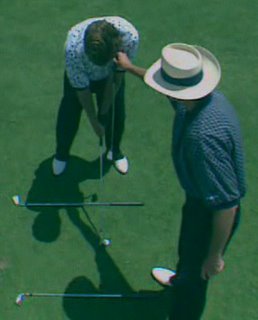 Here are some pics of David Leadbetter and Nick Price demonstrating the ball positioned off the left heel with varying stance widths. Notice in the large picture that Leadbetter is actually holding a club right where Butch recommends that you position the ball - in line with the logo on your shirt!

This picture captures Nick Price's ball position with a 9-iron: 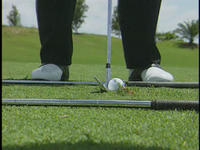 Here's his position with a 3-iron: 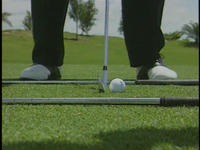 Notice in each case, Nick's ball position is approximately the same distance away from the left heel. This is very similar to Tiger Woods' ball position.

I will give this a try. It sure will simplify all the different ones I have been using.

Interesting post. I definitely agree that ball position is important. I've seen the David Leadbetter video you took screen caps of, which you can tell is pretty old because Nick Price doesn't look that young anymore.

More interestingly, about 2 weeks ago I saw a talk segment on the Golf Channel with Kelly Tilghman chatting with Butch Harmon and 2 of his pupils, Stewart Cink and Adam Scott. Scott described his typical short iron shot as being more of a knockdown shot with a much lower, driving trajectory with the ball positioned back toward the middle of his stance (which delofts the club face). He even admitted that this is now his "go to" shot and is his dominant iron shot ball flight, regardless of wind factors.

When I attended a Monday morning practice round for the AMEX tourney at Harding Park last Oct, I saw with my own eyes that this was definitely the case. I was shocked to see Scott's approach shot into the 9th green (8-9 iron range, no wind) having a lower, driving trajectory than what I had thought these pros should be hitting with short irons.

After this statement by Scott, Harmon responded by confirming that pros had a preference for these lower trajectory iron shots because distance control was so much better with this type of ball flight. Also, playing the ball back in your stance promotes ball first contact which makes it easier to pinch the ball off the turf for solid ball striking, especially with short irons. However, with long irons I tend to agree that the ball should be played off the left heel.

just played today, and I recall that I didn't move around as much...kept the ball in basically the same place...so yeah, this works..at least today...
read your stuff on grip, and agree totally, that for me at least, stronger is better, and a little uncomfortable at first, but staying with it....
Putting your site on my links tomorrow.

I haven't played golf in almost 2 months and it has eveything to do with the position of my balls.

My wife has them in a jar on the nightstand.

I always thought Leadbetter and Harmon were mortal enemies. You know, Coke and Pepsi, Redskins and Cowboys, Oil and Water, Tiger and Phil, etc...

I really am just commenting to say that I liked this post. I have been so hung up on posture and tempo at the range these days that your alignment tips were refreshing. I hit the ball great last night, and a lot of it had to do with reading this and refocusing on something simple.

I find that much of my golf game / swing has to do with confidence.

After I fully committed to these grip and ball position techniques, my game has improved tremendously. Knowing that these techniques are correct, or at least accepted by some of the most respected golf teachers, has been all the difference. You just can't play well if you don't have confidence in what you are doing.

Remember, the slightest amount of doubt can send your game into a tailspin. Good luck!

I agree that ball position is important. However, to place it relative to the feet don't make sense as golfers have different stance width in their setup. The wider the stance the more forward the ball for long irons and more and backward for the shorter irons. To me this is one of the myths in golf like all the other tips one find in magazine and books written by the pros.

I used to shift the ball along the same width stance - forward for long irons, middle for middle irons, back for short irons. Did this for years with a reasonably good iron game (h/c) 12-15).
Tried this tip, biggest problem was I previously had a wide stance and when I narrowed for middle and short irons I swayed. Now I have got that sorted and things have improved significantly. H/C now 10.3.
More good tips please.

I agree with the constant ball position philosophy. If you look at the image linked below for irons (regardless of if it is a wedge or 3-iron) it is in line with the left ear / logo area. With the modern driver the tendency is in line with the front shoulder.
https://img99.imageshack.us/img99/254/golfprosetupballposdg0.jpg