Golf training aids are a dime a dozen. No other sport has spawned such an array of gizmos designed to teach people how to play a sport. There are weighted clubs, hinged clubs, molded grips, alignment aids, impact bags, positive energy bracelets, laser-guidance systems, you name it. 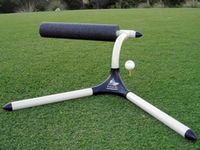 But I hear that the one golf aid that delivers real results is the Inside Approach. Heck, it's even endorsed by the greatest golfer of all-time, Jack Nicklaus himself.

It's designed to fix the common "over the top" movement that produces that ugly slice generated by the vast majority of golfers. While it may be "holy grail" for banana ballers, the only thing I could think about as I was watching the Inside Approach infomercial was damn that looks cheap. And when I say "cheap", I mean cheap in construction and cheap to make. It literally looks like it was pieced together by some 6 year-old kid let loose in the plumbing department at Home Depot. I was totally floored when the price appeared on my TV: $79.99! Are they serious? 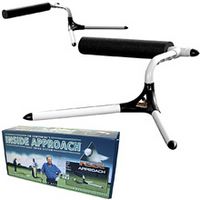 I know the dollar doesn't go as far as it used to, but no person with at least half of a brain can look at this thing and say, "yeah, that looks like it's worth 80 bucks." Naturally, knock-offs such as the $24.95 "Slice Buster" sprouted immediately to capitalize. But is such a device even worth that much? Even if it cures your slice for good?

I say, "Hell no." I figure that I could make it myself out of PVC pipe for about the price of 2 Big Macs. But lo and behold, the guys over at Free Golf Info Forums beat me to it. Check out the "Do-It-Yourself Inside Approach" (you need to be logged in to view). They have detailed plans, instructions and photos for anyone to build their own version of the Inside Approach. Sorry Jack.

Rather than pay nearly $80 for that thing, I'd just as soon take apart a wire clothes hanger, bend it so that it looks like an "L", fashion one end with some foam and stick the other end in the ground. Voila. I'd have just about the same thing.

The only time I've ever like golf was watching Happy Gilmore.

If you go on eBay you can buy the plans for $5. With these plans and another $5 in materials from Home Depot (Some plans even have the part number), you can build your own. No video, but I don't think that matters

I haven't battled a slice ever since I started playing seriously. My natural ball flight is a draw, but being a former baseball player I tend to start pulling and hooking it. The only cure seems to be a super-slow swing and then I lose distance.

For me, as with most, it all starts on the tee. If I can't get off good consistently, the rest of my game eventually goes in the tank.

There is nothing more painful for me than playing the tips with 3 heavy hitters bombing 300-yarders while I'm hooking and my good shots are barely rolling 250.

Golf is my second favorite sport. My favorite is stabbing white women.

The insided approach is not for everybody. It's sad how we golfers will throw almost unlimited funds at things that pose as cure-alls. The inside approach teaches a severely inside swing, which won't help you if you get stuck coming from the inside. Also produced wild hooks for me, which I didn't need. I was not a true over the topper, so the inside approach was not really designed for my type of swing fault.

You have a funny blog. Nicklaus should be proud of you.

You are Grouchy because you cannot play good enough to enjoy a game of golf. :)

I went to a local sporting goods store and bought one for 50 bucks.

I bought a knockoff on Ebay for $15, aded some weight to the legs for stability (lead tape, etc.), and viola, it's the greatest teaching aid I've ever used. And I don't agree that it promotes a severely inside swing. You can swing almost dead on and not have a problem with it. What I like about it is it promotes a long slow takeway (need to stay under the long foam barrel), a slightly inside instinct, and will DEFINITELY alert you to coming over the top.

P.S. Nice blog. Tell us more about what the rifle shafts did for your Nike iron performance.

Thanks for the comments. I opted for the Rifle 5.0 shafts because they are a little stiffer than the TT R300 shafts.

They work fine. A little higher ball flight due to the lower kickpoint. It works great for me because I have a naturally low ball-flight.

I found some of popular golf aids quite helpful. Sometimes they might seem pricy but they really help a lot. At least they help most of the people I know... great blog btw.

I am thinking of starting golf. Someone told me that golf like any other sports is all about the mind.

The inside appproach is on sale this week at K-Mart for 19.95. i bought mine there at the regular price of 29.95 a few months ago which is still not to bad. Has really helped make me a better ball striker.

Just bought one at Target for $11.86 AND it comes wiha free one year subscription to golf digest.