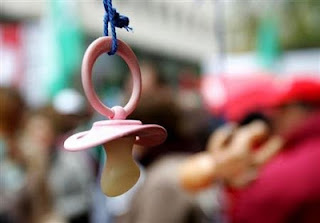 When a 19 year-old Sergio Garcia first burst onto the worldwide golf stage at the 1999 PGA Championship, many thought that this young upstart could be one of the "young guns" to finally challenge Tiger Woods for many years to come. Alas, he never panned out to be the rival to Tiger that many had hoped. In fact, most view his career to date as a disappointment. While he has won 20 tournaments worldwide, none have been majors. A balky putter and a shaky mental game are the major reasons why Sergio hasn't occupied a place in the game's elite echelon. But what's most disappointing to me about Sergio is not his career but the manner that he has carried himself over his career. Sergio has been one of those guys who always finds someone else to blame for their woes. It was easy to dismiss this as immaturity early in his career, but now at age 33, it no longer holds water.

At the 2013 Players Championship Sergio complained that Tiger interrupted his back-swing. It was a curious complaint, to say the least, because Tiger was out of view clear across the other side of the course surrounded by a sea of people and could not have intentionally timed an interruption. Sergio's complaint would carry some merit if Tiger had swung out of sequence or during Sergio's swing. But that didn't happen. It seems the unforgivable offense that Tiger seems to have committed in the eyes of Sergio is that he pulled a club from his bag. The crowd reacted with approval at the club Tiger pulled and this interrupted Sergio. If it seems ridiculous to be upset at a playing partner for pulling a club during your swing, you are not alone. I already called a wahmbulance.

But this incident didn't die as it normally should. Instead, Sergio used it as a springboard to vent his frustration at the World's #1. He clearly doesn't like Tiger and made it known that his main beef is over honesty. In response to Tiger's explanation of the incident, Sergio replied, "That's fine. At least I'm true to myself. I know what I'm doing, and he can do whatever he wants." A week later Sergio said, "He called me a whiner. That's probably right. It's also probably the first thing he's told you guys that's true in 15 years. I know what he is like. You guys are finding out."

Like him or not, Sergio isn't afraid to speak his mind. Many applauded Sergio for calling out the false persona known as Tiger Woods. But wasn't that already revealed after the 2009 Thanksgiving Day Massacre? Regardless, Sergio's praise and goodwill among the Tiger-haters quickly evaporated after he was asked if he planned to have dinner with Woods at the U.S. Open. Sergio joked, "We will have him round every night. We will serve fried chicken." Yup, he went there and at that moment Garcia went too far. Sergio apologized for his comment explaining that "in no way was the comment meant in a racist manner." But such a comment is clearly racist. How do you use a racist comment not meant in a racist manner? I find it highly suspect that Sergio conjured up "fried chicken" just randomly. It's clear that Sergio was trying to make a humorous comment by using a racial stereotype. If Sergio were really true to himself, as he has claimed, he would own up to his action and apologize for making a racist comment instead of claiming the comment wasn't racist. Ironically, it is now Sergio's honesty that is put into question.