You Want To Give Me Golf Advice? Wait ‘Til The 19th Hole! 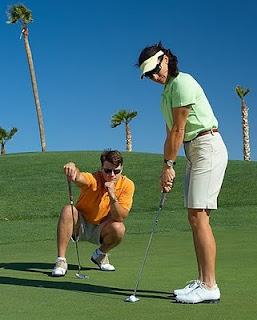 My golf blogging friend Pat "GolfGurl" Mullaly was kind enough to write the following grouchy golf observation for us:

It’s a fascinating phenomenon: golfers always want to give fellow players advice — especially guys giving advice to women. What makes a guy think I need advice right in the middle of my round?

I’ve been playing the game of golf for years, and though I am not a great golfer, I enjoy the game as much as anyone. I love being outside, enjoying the good weather, enjoying the good company, enjoying all the little things that make a round of golf so much fun. I especially enjoy the little sounds that are part of the game: the pure, clean “thwack” sound of a great drive that goes right down the middle of the fairway; or that sweet sound of the ball as it hits the back of the cup. The sounds I can’t abide are the mumbles and side remarks of my male golfing partners giving me advice — often, bad advice, as I play my next stroke.

I play twice a week, one day with three guys, the second day with three women. Advice is always forthcoming from the guys, seldom from the women. It must be some sort of protective instinct that males have built in, — trying to give me advice that will help me “survive” my round with a decent score. The women I play with don’t care about my game unless I am playing as a team member in a tournament. Then, I hear strategy, suggestions, and advice—but it’s directed at the group and at how we are going to manage the hole. It’s not about one player’s style of play. With guys, it’s different. Even the clunky players think they know best.

Unsolicited advice drives me nuts. If you want to give me advice on the way I play golf, first ask if I even want to hear it. I may, or may not. If I agree to receive your wise words, then wait ‘til the end of the round, meet me at the clubhouse, buy me a drink and I will hear you out. Just don’t do it while I’m playing. It’ll probably ruin my round, and you wouldn’t want to see that happen, would you? 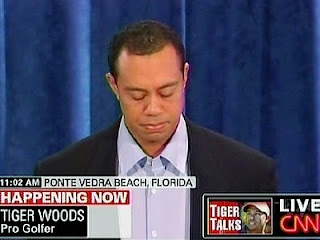 The Tiger Woods scandal has long overrun its course, IMHO. To me, it's just another story about a somewhat normal person who became corrupted by the trappings of fame and fortune. Irene Folstrom, his ex-college girlfriend describes the pre-famous Tiger as a normal college kid who was "so human and cared so much about other people and the world around him." Considering he attended Stanford, he was most certainly on the nerdy side of things as well.

But when your hommies go from Screech and Urkel to Michael Jordan and Charles Barkley, it's safe to say that your world is turned inside-out. Add in to that mix the universal praise and adoration for being the "best of all-time" and it's understandable how Tiger felt invincible. Yeah, Tiger messed up. But the failings of such self-righteous public figures as John Edwards, David Vitter and Eliot Spitzer are far worse. These guys were supposed to be our moral leaders and instead became the faces of hypocrisy.

Tiger has made his public apology, so it's time everyone moves on. No offense to the rest of the PGA Tour but it's been a real snoozefest without him.