Supinate The Wrist: The Key to a Solid Swing

As I have written before, all great swings, whether they be single-plane/two-plane, steep/flat or fast/slow, have one thing in common: the hands are ahead of the ball at impact.

In addition, the left wrist should be flat or bowed through impact. 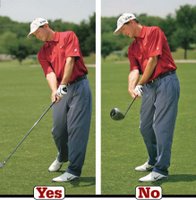 In the April 1956 issue of Golf Digest, Hogan wrote, "I've noticed one thing that all good golfers do and all bad golfers do not. The good ones have their left wrist leading at impact. It seems a small thing, but I've found it to be universally true. At impact the left wrist of a good player is slightly convex, while that of a poor player is generally concave."

This is all easier said than done. Proper supination with a flat or bowed left wrist is an advanced concept and one that it very difficult for the average golfer to learn. The vast majority of golfers instinctively flip their left wrists forward through impact believing that such an action will produce the optimal results: maximum distance and trajectory. Unfortunately, this couldn't be any farther from the truth. 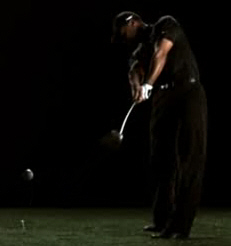 As with most things in golf, intuition must be thrown out the window. Instead, think of rotating your left wrist without breaking it.

Supination is probably the single most important action in the proper golf swing. Unfortunately, it is also probably the least understood. If you are a golfer and have never heard of "supination" before, you owe it to yourself to fully understand this concept and ensure that it is a part of your swing. If you need hands-on assistance, your friendly neighborhood PGA teaching professional is your best bet. In the meantime, check out this helpful tip on supination. Also, here's a good reference for all the wrist actions in the golf swing: The 6 Actions of the Wrists and Forearms.

A few years back, I was watching Lee Trevino hit a few balls before a corporate outing and he was talking and giving a little clinic at the same time. I remember him saying, "It's important that you feel like you are hitting the ball with the back of your left (leading) hand". . he was a Hogan fan and that's pure Hogan bowed left wrist supination.

Adding to Lee's comment, hit down on your irons, leading with your left hand. It will supinate your wrist and compress the ball against the turf and it'll really fly.

hi there, nice blog and idea.

I try and achieve this by putting my hands ahead of the ball at address with my irons. This is the standard left arm and club forming a straight line. I think its important not to let the hands get too far ahead of the ball at impact however, and this is what is so difficult, doing this properly and having the strength in the wrist not to artificially jerk that left wrist out to the left.

I need tire looking at the Tiger Woods slow mo videos on the Nike website. You can learn so much by studying them.

I am so glad that I found this site. This is awesome and def some great advices here.

One advice that I received, THAT WOKED FOR ME, is to actually put 60% of your weight on your left leg (right if you are left-handed) before your backswing and downswing while maintaining your head still. This will make sure you are balancing yourself throughout the whole swing and not shifting too much weight from left to right which can cause people to hit it fat because you "hit down" too early.

“Ben Hogan details it as a motion in which the left hand (hand towards the target) moves from a “palm down position to a palm up position” as it passes through the hitting area. While true, this description seems incomplete to me. Watch your left (forward) hand as you slowly move it from a hip-high backswing position to a hip-high post-impact position and you will certainly see the hand turn over as Ben describes it. But Ben’s real focus is in illustrating the wrist position at the moment of actual contact with the ball. This is the secret to his famous lag. The last instant of straightening the wrists and the right arm -- is delayed until just after the moment of contact. Ben says that this is the source of the “sweet feeling” he sets out at the beginning of the chapter. The assured establishment of this sensation is accomplished by how you hold the club at address. If you do not set and maintain an upward lifting wrist-cock throughout the backswing and down to the hip-high position, the wrist will not (as Ben describes it) supinate when the club passes through the impact zone.”

for anyone not familiar with these concepts it is important to note supination of the left hand is very different from bowing the left wrist.

Wrong. You hit down by proper rotation. Forcing a "hit down" is not how you achieve this. That's exactly what NOT TO DO.

If your shoulders are slightly open at impact that's how you strike the ball on the down. You do NOT purposely swing down at the golf ball. Unless you want to play at a 20 plus HC.

Hands ever slightly ahead of ball. And the hands should be WELL in front of ball at impact.

People need to stop with the term hitting down. It doesn't mean what people assume and if confused people looking for actual instruction.

Hitting down only means striking the golf ball slightly before the swing bottoms out. It does not mean a downward blow on the ball.

It's achieved by proper rotation on downswing. If you are a beginner pls don't listen to these comments and go to YouTube. These guys are probably really bad golfers.