A Tiger Becomes a Phoenix? 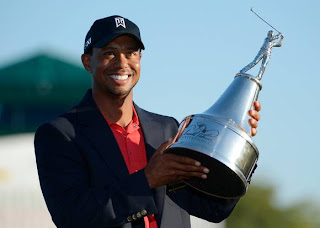 The phoenix is a mythical and sacred firebird. According to mythology, the phoenix builds a nest near the end of its life that eventually ignites and engulfs the phoenix in flames. A new phoenix is reborn from the ashes and the life-cycle continues.

Like a phoenix, Tiger Woods arose from the ashes of his recent past at last week's Arnold Palmer Invitational at Bay Hill Club and Lodge with an emphatic win. We are all too familiar with Tiger's fall from grace starting with that fateful Thanksgiving Day car crash in 2009. It is arguably the biggest downfall in the history of professional sports.

Over that time, Tiger has had to deal with a number of obstacles both on and off the course. Chief among them was the self-inflicted pain and consequences of a sex scandal in the public eye. It ultimately led to an emotionally and financially costly divorce. Physically, Tiger continued to have trouble overcoming nagging knee and Achilles injuries. Hank Haney dropped him as his swing coach and he hired Sean Foley to overhaul his swing. Tiger released his longtime caddy, the fiery Steve Williams, in favor of Fred Couple's former looper, Joe LaCava.

But Tiger finally overcame all of those obstacles with his 72nd win on the PGA Tour. It took 923 days and 27 tour events, a long time to the casual observer. However, it's quite understandable if you consider everything that Tiger has had to overcome. Regardless, Tiger 2.0 is finally here and it will be interesting to see how far he soars.