The Sport With the Most Ridiculous Rules 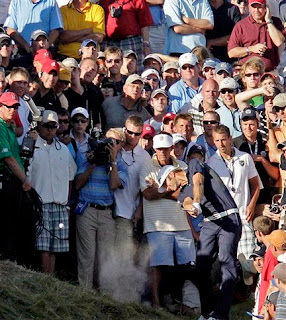 I have always thought that the creator of the Rules of Golf must have been some sort of mentally challenged sport sadomasochist. Isn't the feat of rolling a ball into a tiny hole from hundreds of yards away using only sticks hard enough by itself? I guess not because there are a plethora of rules to make this darn sport even more difficult.

All the golf rules ruckus right now is over Dustin Johnson's 2-stroke penalty for grounding a club in a hazard during the PGA Championship at Whistling Straits. The controversy is that Dustin failed to recognize that his ball lay in a bunker because the crowd had been standing in it and trampled it down. Sure, it wasn't clear that his ball lay in a bunker, but it was a bunker none the less. Because he grounded his club prior to his shot, he violated USGA Rule 13-4: Ball in Hazard; Prohibited Actions of the Rules of Golf.

However, my problem isn't with the determination of a bunker or other hazard on a golf course. My beef is that there is a rule about grounding your club in the first place! Grounding your club is just a natural resting spot for your club before you swing. Why should it be any different in a hazard? Isn't it penal enough to have your ball lay in a hazard? But more to the point, is there really any advantage to grounding your club? It's not like you're allowed to tee the ball up. I have been playing this godforsaken game for over 15 years and not once did I feel that not grounding my club in a hazard materially affected my shot. I'm sure that Dustin would have had the same result with his 2nd shot on hole #18 if he had not grounded his club in the bunker. The rule prohibiting grounding of the club anywhere is just asinine to me and is just one of the many rules that should be stricken from the Rules of Golf.

In the end, this is just another instance of why golf is often the laughingstock amongst the sporting world.