Ever since Tiger thoroughly dominated the British this year, he has been playing some out-of-this-world golf. He has played so well that it's almost godlike. Well the Golf Gods don't like mere mortals to approach their divinity, so it was just a matter of time before they struck him down.

They did so Saturday during the 3rd round of the Bridgestone Invitational. After taking a commanding lead, Tiger turned into your average Weekend Warrior golf hack. Tiger succumbed to the God of Bogeys and recorded four consecutive bogeys, his longest such streak in nearly 10 years. All of a sudden Tiger's comfortable two-shot lead disintegrated and left him five shots behind the leader. Dave Pelz was smiling. Phil was smiling too, but when is he not?

But knocking Tiger's A-game down his C-game is still better than most PGA Pros' A-games. In the end, it was barely enough to get by a feisty Stewart Cink and chalk up career PGA Tour win number 52. Simply amazing.

With all of Tiger's success after two major swing overhauls, I'm beginning to think that Tiger could win if he adopted Charles Barkley's swing:

However, I still think that Tiger's swing under Butch Harmon's watch was still the best. Fortunately, we can still see what it looked like by watching Adam Scott, the White Tiger (updated with video).

Dave Pelz Was Wrong for Once

First, thanks to Tiger on the unbelievable clinic he gave at the Windy City. It's just another example of how Tiger-proofing courses only makes it easier for Tiger to win. Now, back to the regularly scheduled program...

Dave Pelz, the well-known short-game authority and mad scientist of golf, is one golf instructor that I respect tremendously. 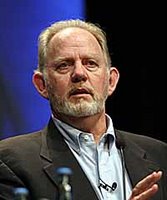 As a former NASA engineer, Pelz supports his teachings with solid scientific research. It's not uncommon for him to have reams of data to back up his findings. For example, Pelz provided the statistical data that proves that putts rolled at a speed to exactly 17 inches beyond the hole have a higher probability rate of going in than putts hit at any other speed. He also conducted experiments that answered the age-old question, "Should you leave the flagstick in the hole or pull it out?" When Pelz says something about golf, you might as well just accept it as fact.

That is, until last week. Uncharacteristicly, Pelz went on the record to make several totally unscientific claims:

"When Phil's at his best, I'm thinking nobody can beat him."

[And that includes Tiger Woods?]

"You bet it does," Pelz said. "If Phil's long swing is good, his short game, I believe, is the best in the world. He doesn't have a serious weakness inside 150 yards.

"I'm not saying Tiger's short game is bad. He has a great short game. But I think Phil putts more consistently than Tiger does. He has more imagination and a few more shots around the green."

What you talkin' about Willis?

There's no doubt that Phil Mickelson is one of the best golfers of his generation. But he happens to be in the same generation as the best golfer ever. To make such obviously biased and subjective statements is quite surprising for Pelz, especially his assertion that "Phil putts more consistently than Tiger does." Ever since Phil turned pro in 1992 he's been touted as a "great putter". But I've always thought that he was overrated in this area. Over the years, I don't think that I've seen a "great putter" miss as many 3-footers as Phil. I've even seen Phil 3-putt from about 10 feet. Tiger, on the other hand, just doesn't seem to miss a putt when it really matters. In fact, according to Shotlink, Tiger hasn't missed a putt inside 4 feet this season! If I needed someone to make a putt to save my life, there's no question that I would choose Tiger over Phil.

Regardless, why the heck would Pelz make such ludicrous comments? Did he put an ounce of thought into it? Was it an over-exposure to the noxious fumes emanating from his golf laboratory? Whatever the reason, all it did was to agitate an already fired up Tiger Woods to crush Pelz's chubby student with the phony grin. Like Michael Jordan, Tiger makes it a point to ruthlessly annihilate those who "diss" him.

Mr. Pelz, for your well-established reputation's sake, retreat back to your lab and stick to your test tubes and bunsen burners. And if there's room, take Stephen Ames with you.

We all know that golf is one heck of a tough game. But for many of us, that's why we play the game. People who love golf love challenges, and there's not many other games that present both the mental and physical challenges quite like golf.

But shooting a birdie in one is possbile! Here's the video to prove it:

Michelle Wie Losing Was a Sure Bet

If you had heard about a 16-year-old boy who placed 3rd at the Masters, 5th at the U.S. Open and 3rd at the PGA Championship within the same year, you'd be pretty amazed wouldn't you?

Well that's the male-equivalent of what Michelle Wie accomplished this year. Unfortunately, the Michelle Wie hype has effectively numbed people to her achievements, no matter how impressive they may be. Some have even been critical. This kid could cure cancer while walking on water and it still wouldn't satisfy some people.

But sometimes, you can use such irrational expectations to your advantage. Earlier this year, my online bookie took action on the number of majors that Michelle Wie would win in 2006. The Wie hype actually convinced people that she could win majors already! While I think Michelle is a tremendous talent, I just think that it's too early for her to win in the big leagues, let alone the majors.

Back in February, my bookie offered 1-2 odds on Wie not winning any majors. That was just an offer too good to be true. In my mind, that was a guaranteed 50% return over about 6 months. With the stock market going sideways and the real estate market topping out, was there a better investment? I just wish that I had bet the farm instead of a measly 20 clams: 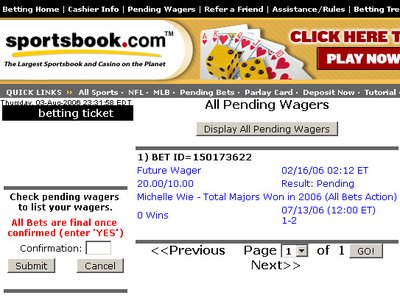 It just goes to show you that it pays to still listen to Public Enemy's classic, "Don't Believe the Hype!"

P.S. FYI, I've added the video of the Tiger Woods SwingVision to the original post. Enjoy!