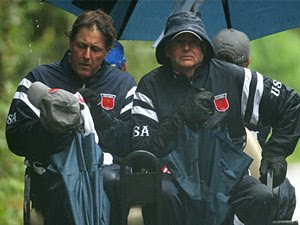 I'm a huge fan of Sun Mountain golf products. They have repeatedly won me over as a customer with such novel golf innovations as the stand bag, Dual X-Strap and the Speed Cart. Unfortunately, Mother Nature literally rained on their parade at the 2010 Ryder Cup this past weekend.

If you didn't hear, Sun Mountain provided the rain suits for the U.S. Ryder Cup team. Initially, the gear was panned for their gawd awful looks. Butch Harmon quipped, "They are the ugliest things I have ever seen." But really, hasn't ugly golf attire been somewhat the norm for Ryder Cup teams? Not a surprise to me since it appears that the only qualification for designing and selecting the team's wardrobe is to be married to the captain. But so what about fashion? When it comes to rain gear function over form is paramount. Anyone who has had to play golf in the rain knows the utter misery of playing in wet clothing. Not only is it uncomfortable but it can adversely affect your play.

Unfortunately, the U.S. Ryder Cup team experienced this firsthand since their Sun Mountain rain suits possessed neither form nor function. They were found to be about as waterproof as one of Lady Gaga's fishnet tops. Their leaky gear had to be ditched in favor of generic off-the-rack digs bought from a merchandise tent. What a debacle! It's quite simply an excusable failure by any measure and a huge blow to the manufacturer. This is certainly a low point for the company but it got even lower when, in classic "kick 'em when they're down" fashion, the manufacturer of GORE-TEX issued the following statement:

"It's unfortunate that the U.S. team at the Ryder Cup was not wearing uniforms with the GORE-TEX® brand, especially if the faulty gear ultimately interfered with performance," said Yvonne Erickson, marketing leader at W.L. Gore & Associates. "Gore has rigorous uncompromising standards in place to ensure that our products are of the highest quality, to back up our Guaranteed to Keep you Dry® promise to consumers. Gore and Sun Mountain Sports parted ways in 2006 and, therefore, GORE-TEX® brand technology was not used in the rain jackets and pants worn by the U.S. team this morning. We hope that the U.S. Ryder Cup Team will be wearing uniforms with GORE-TEX® product technology in the future."

Hopefully this epic disaster doesn't dampen Sun Mountain's hard-earned reputation as a producer of quality golf products. I've owned two stand bags and a Speed Cart and I've been 100% satisfied with their quality and performance. I'm still a fan and I'll continue to buy their products as long as I play golf.