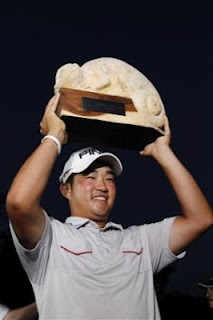 Jeremy Lin is all the rage in the NBA these days. About to be cut, he came off the bench to play some of the best ball at his position and help elevate the bottom-of-the-barrel New York Knicks to a legitimate playoff team. Adding to his unbelievable ascent and growing legend is that he is an American of Asian descent. That's a first in the NBA.

Well the PGA has it's own version of Jeremy Lin. His name is John Huh and he is tearing up the PGA out of nowhere in Lin-like fashion. Huh started his rookie year making the cut at his very first start, finishing top 15 in his next two starts, and winning in his fifth start last weekend at the Mayakoba Golf Classic. Like Lin, Huh was born in America to Asian parents. Huh played at Crescenta Valley High School in La Crescenta, California where he wasn't even the best player on his team. He was a virtual unknown on the junior golf circuit because of limited financial resources. After high school, Huh attended California State University, Northridge but left after two weeks due to scholarship ineligibility after the NCAA changed a rule. Huh turned pro in 2008 and played on the Korean Tour before qualifying for the 2012 PGA Tour by finishing T27 at Q-school. Huh has the hottest rookie start on the PGA Tour since Tiger and he's well on his way to the 2012 PGA TOUR Rookie of the Year honors. So it appears that there are a lot of similarities between Lin and Huh. However, unlike Lin, we probably won't have to endure all those annoying puns!