As I was flipping channels the other day, something on Rap City, the BET music video show, caught my attention. It was more than just the usual booty shaking, Cristal popping, bling flossing, and pimped-out whips on 20" dubs. I became entranced with the lyrics from Terror Squad's rap video, "Lean Back." 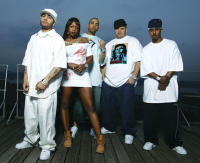 As strange as it sounds, I realized that this song secretly contains one of the keys to the golf swing in its catchy chorus:

No, it's not in the dance, the pants or even the "Roc-away." The key to the golf swing is to "lean back, lean back, lean back, lean back..." If you look at the swings of the best golfers in the world, you'll notice this recurring theme. Whether it's a one or two-plane swing, weak or strong grip, quick or slow swing tempo they all share one common trait: at impact, the hands are always ahead of the clubhead. In other words, the shaft always leans back to the ball at impact. This is a very important fact to remember as I believe that it is the key to proper ball-striking. If there were ever a "secret to golf" or the "key to the golf swing" I truly believe that this is it.

I advise every golfer to read this Golf Digest article by Tom Ness for drills to ingrain this impact position. According to Mr. Ness, "The act of trying to get the clubhead moving faster - by throwing or flipping it toward the ball - is the single biggest source of frustration in the game...Poor players let the clubhead pass the front arm before impact. In fact, there's a direct correlation between when the shaft catches up to the lead arm and handicap. The later it catches up, the lower the handicap. It's really that simple."

Your wrist positions at impact are key to achieving ball-striking nirvana. In particular, the lead wrist (the left wrist for a right-handed golfer) must not break through impact. Instead, the lead wrist needs to supinate. Mr. Ness notes, "A good player's leading wrist is flat and the trailing wrist is bent." A mental image that I like to envision to help me achieve this impact position is painting with a brush. When you paint with a brush, you always lead with your hand, with the brush trailing behind, correct? I imagine that my club is a long paintbrush and I'm painting the ground. Another image that might do the trick is to imagine that the club is a broom and that you are sweeping the ground with the broomhead trailing your hands.

Do yourself a favor and videotape your golf swing. Your impact position should look similar to this SwingVision photo of Tiger hitting an iron. If it's not, you will improve your ball-striking astronomically if you work on achieving this impact position each and every time. I would personally guarantee it, but my attorney advises otherwise.

So the next time you're out on the golf course, think of this little rap to improve your ball striking:

see my irons don't glance,
if I lead with my hands and,
hit the rock away...

I've heard this same advice said another way (I even heard Tiger say it): at impact, try to have your hands and club at the same position as address. Same plane, same everything.

AHAHAHAHAHHAHAHA! I NEVER would have compared Fat Joe to golf...NEVER! Great observation!

I wonder when we'll see some gangsta golfing.

Those are some dope lyrics Rich. You got the idea!

Once you see Snoop swinging a golf club, you know 50 Cent is just around the corner...

I have arrived at a strange place in my game.

As an ex-baseball player, my natural instinct is to let the clubhead get in front of my hands with alot of forearm rotation.
After many a round and practice session, I have found that keeping my hands in front of the ball can help me cure these ills. I can keep the ball more on track when I remain disciplined in this endeavor.

The crazy thing is that I gain so much more distance when doing it. My ball flight still remains pretty consistent, but the distance I'm gaining causes me to shake my head a bit.

Over time I will become more consistent, but right now sometimes I dont know what club to hit. I've always been pretty average distance-wise, but when focusing on my hands, I seem to get a 10-15 yds more with the same good high ball flight. For some reason I think it extends my swing. Not make it "longer" in a backswing sense, but maintaining the same backswing with the hands in front of the ball gives the club just that much more recoil time before impact and the yardage I'm getting proves it.

Why does Snoop Dogg carry and umbrella?

did video my golf swing on the course and did my own review . looking on those snapshots , I have improved a lot on driving accuracy and also gains some distance.

Nice to hear that you were able to improve your game. I hope others are able to do likewise. Good luck and thanks for the feedback!

Very clever rap lyrics and jokes. You need to hook up with Diddy...

I'm not sure of the validity of this earlier comment: "at impact, try to have your hands and club at the same position as address". Impact does not, or at least should not, match address.

I'm pretty sure that at impact the shaft is leaning forward. Fat Joe must be a bad golfer.