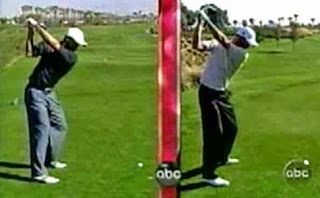 Charles Caleb Colton once wrote, "Imitation is the sincerest (form) of flattery." If that's true, Tiger Woods must feel like Adam Scott is absolutely in love with him. It is well known that Adam Scott was completely captivated by Tiger's golf swing and set out to copy it as best he could. He did a pretty darn good job and his swing looked like a carbon copy of Tiger's until Tiger started toying with it about a decade ago. But if you look at Adam's swing now, it's still the same old swing. He's like a human time capsule preserving Tiger's vintage swing circa 2000.

But the swing isn't the only thing that Adam copied from Tiger. Adam hired Tiger's former swing coach, Butch Harmon, to perfect and maintain the swing clone. Proof of Butch's influence can be found if you watch Adam's pre-shot routine where you can see him use Butch's golf grip method. On the equipment front, Adam signed an endorsement deal with Titleist, Tiger's former weapons dealer. Then, after Tiger dumped his caddy, the grouchy Steve Williams, who do you think was there to yank him off the unemployment line? Adam, of course. Most recently, Adam copied Tiger by winning the 2011 World Golf Championships-Bridgestone Invitational at Firestone Country Club last weekend, a course that Tiger has won seven times before!

Now is there anything left for Adam to copy? An easy one would be to wear red on Sundays. A much harder one would be to win a major. But I'm most interested if Adam will try to date one of the Nordegren twins. If he ends up marrying one, he could start having affairs on her to be a true Tiger copycat!