The UPS delivery guy is the Santa Claus for adults. I always get that sudden rush of excitement when I see that plain brown cardboard box sitting on my doorstep. Such was the feeling when I recently found a long, skinny box perched against my front door. Inside was an Alpha C830.2 driver with an Aldila NVS shaft!

You may be wondering, what the heck is an Alpha C830.2? We are all familiar with the big golf club companies such as Titleist, Ping, TaylorMade, etc. These guys have huge marketing budgets to ensure that they remain top of mind with the consumer. As a result, it's very difficult for the new and smaller golf companies to get noticed.

Alpha Golf is one such golf company. Started in 2000, Alpha was able to attract some attention relatively quickly by making a name for themselves in the sport of professional long drive. Long drive is golf's loud, rebellious and juiced-up younger brother. It is a sport that takes one element of golf to the max and then kicks it up a notch. To be successful, competitors need equipment that can withstand extreme conditions.

Alpha Golf recognized this need and developed drivers that could take the punishment while still offering top performance. Alpha's success on the Long Drivers of America (LDA) circuit speaks for itself. But how would such a specialized driver work for the average golfer?

That's what I wanted to find out with Alpha's C830.2. I had read that the driver head was a full 460cc, so when I opened the package I fully expected to see a Yugo on a stick. 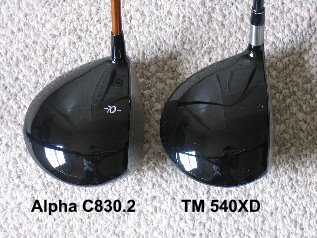 However, I was surprised to find a rather conventional looking driver in terms of size. In fact, it looks even smaller than my 400cc TaylorMade 540XD when viewed from the top! At first I thought that I had received the wrong driver, but "460cc" was clearly stamped into the sole. Like Anna Nicole Smith, the Alpha C830.2 hides its mass well.

I was anxious to get to the course to see how the Alpha C830.2 would stack up. To be honest, I haven't hit many 460cc drivers. They always appeared a little too big for my liking. In this respect, the C830.2 was easy on my eyes.

I have been playing with the C830.2 exclusively over the last month and I can honestly say that I'm pleasantly surprised. 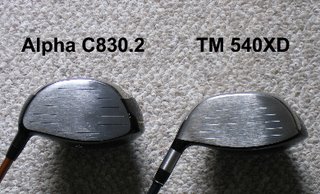 With my trusty ol' TaylorMade 540XD, I probably drive the ball an average of 260-270 yards when I nut it. It's hard to say for sure, but it seems that I'm a little longer with the C830.2. I just don't know if it's the sword or the swordsman. I could be subconsciously swinging harder than normal because I know that the C830.2 is a "long drive" driver. Regardless, I've hit some of my longest drives ever on my home course with the C830.2.

In terms of accuracy, the C830.2 fares well. With 460cc, it better! With all that surface area from its deep face, I seem to hit the screws on the C830.2 more frequently than my 540XD. As a result, my drives are a little bit more accurate.

As far as feel goes, I would characterize the C830.2 as having a solid metallic feel and sound, reminiscent of a Titleist driver. It doesn't have that hollow aluminum baseball bat sound found on some of the other 460cc drivers.

Having put the C830.2 through its paces, I believe that it compares very favorably against the "Big Name" offerings. Whether it is the right driver for you is another question. I feel that golfers need to demo many different drivers to find one that best fits their individual game. That being said, the C830.2 is definitely worth a swing. It may be especially attractive to those traditionalists who are uncomfortable looking down at some of the gigantic looking 460cc drivers out there. Just don't fall into the trap of assuming that the C830.2 is a "long drivers only" club. It works great for the "average" player as well.

Great post. I'm glad there are other golfers out there who realize its ok to buy clubs that aren't made by the "big" companies.

Quality counts, but I'd rather be paying purely for quality rather than marketing.

I have been using an Alph 425 cc
V-2 for several years. It is straighter than any of my Titleists, TMs, Mizonos,and Callaways, and L-O-N-G.

That's quite surprising from the top down how they look pretty much the same size. Either way, I'm a big believer in quality over "marketing" too. If something is going to help my game, I'm going to use it.

I've got a Cobra 427cc SS driver, but have been looking at another LDA favorite, SMT. They've won a few LDA competitions, but, as always, the trick is finding the right shaft, and that's hard to do through the mail. I just interviewed with KZ Golf in North Hollywood. They're sort of a boutique manufacturer who only sell their clubs through fitters. I didn't take the job because I am not a salesguy, but I was stunned by their in-house fitting studio--very nice.

I am curious, how are you getting along with the ALPHA driver?

Thanks for asking. The Alpha is still in my bag as my gamer. I really like the deep face because I feel that I can really tee up the ball and whack it.

I've read that no one has caved-in or cracked the C830.2 in a long-drive competition. While I'm nowhere near as long as a long-driver, it's nice to know that this driver is so sturdy. I have a friend who has had problems breaking drivers, so the C830.2 would be ideal for him. Are you reading this Todd?

Thanks for the update, I've been going back and forth between my TM 510TP and my Titleist 975LFE and not 100% with either.
When I'm on I'm on but OFF is OFF.

I've taken a lesson to repair some set up issues that surfaced after a car accident and injury to my back.
I've read so much about the how much the 460CC helps that I am tempted to look again at a larger driver.

I have a hard time looking down at 460CC but Your comments about the visual size of the ALPHA intrigued me.

I'm left handed and presently hit a Callaway X460 driver. I like it, and drive the ball an average of 270 yrds. But I have a fade that sometimes turns into a slice. I was wondering if there is a way of trying an Alpha C830.2 to tell if it hits better for me than my Callaway.