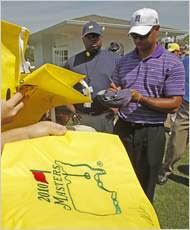 Tiger finally returned to golf at the 2010 Masters. After a humiliating scandal, it was obvious Tiger had to change his ways in the public eye to win back certain golf fans. And that's what he did. Tiger walked without blinders on, acknowledged the crowd at every opportunity with that Cheshire Cat smile, accepted gifts from kids, and actually signed some autographs. In other words, he was acting like Phil Mickelson.

"Acting" is the key word. The whole world now knows that Tiger isn't such a great guy. But I never thought that he was to begin with. Now that he's suddenly become Mr. Nice Guy on the course, it strikes me as completely disingenuous. Are people really buying this crap?

But the vast majority of people are suckered into a public image. Phil Mickelson has made a career of it. I have a golf buddy who is a member of Whisper Rock Golf Club in Scottsdale, AZ. Mickelson happens to be a fellow member. According to my friend, the real Mickelson is 180 degrees from his carefully-crafted public persona. I've heard stories that will rock any Mickelson fanboy's world.

What I liked about the old Tiger was that his public persona was reflective of his true personality. The old Tiger was a cold, focused and ruthless competitor full of "I'm the best ever" confidence. In short, I prefer wolves without sheep's clothing. Phil is just covered in wool.

But how does this all translate into cold hard cash? Contrary to what many believe, Tiger raked in the mega sponsorship dollars because he won and won in unbelievable fashion, not because of some wholesome family-guy image. If that were the case, guys like Zach Johnson, Kenny Perry and Steve Stricker would be the faces of corporate America. The proof will be when Tiger goes back to his winning ways. I bet the sponsorship money will return en masse.