Golf GPS on Your Phone? 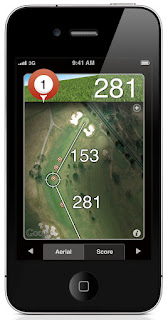 My first experience with GPS technology for golf occurred a little more than a decade ago. I was playing a nice but long-forgotten golf course with some friends. We had opted to splurge on a motorized golf cart and I was pleasantly surprised to find that it contained a magical video screen that displayed your current location on the golf course and yardages to important landmarks. I was amazed at the amount of accurate and useful information provided by this technology.

The only problem with golf GPS technology was access to it. At first it was only found in golf carts. Eventually, it made its way into handheld units. However, I found these units too costly to be worthwhile. While technological advancements and market forces over time have greatly improved the value proposition of these devices, I still never felt comfortable dropping several Benjamins on one.

But having recently joined the modern age by buying my first smartphone, I discovered that its embedded GPS receivers can transform it into a golf GPS device. With several golf GPS iPhone apps available, I hit the Internet to find the best one. I read through many relevant threads on the main golf message forums and one name kept cropping up: the $19.99 Golfshot: Golf GPS. I installed it on my iPhone 5 and hit the course!

Golfshot is a full-featured golf GPS app that replicates the primary features of a dedicated unit. The company has over 40,000 worldwide course maps available for download without a subscription fee. There are two main screens that are easily toggled while playing. One is the aerial screen that displays your location on an overhead map of the hole with basic yardage information. There's a target reticle that you can drag with your finger to pinpoint a location on the map to discover the distance to that point and the distance from that point to the middle of the green. The second screen is the GPS list view and displays detailed yardages from your current location such as distances to hole landmarks and the front, middle and back green locations. Both screens have access to a sub-menu where you can take notes, snap photos, and, most importantly, track club distances. Once you finish playing a hole, you can enter your score on the electronic scorecard.

After playing several rounds with Golfshot, I'm thoroughly impressed. Initially, my main concern was accuracy. However, I compared the Golfshot yardages alongside those from golfers in my foursome who used dedicated laser and GPS handheld devices and found that they were always within a few yards of each other. While the aerial screen is nice visually, the GPS list view is the most useful. In fact, if you're already familiar with a course, you probably won't ever need to access the aerial screen. The swing tracking function is an easy way to track your true club distances and accuracy. Golfshot will store this data and give you valuable statistics on your clubs. Be sure to only track full swings, otherwise you'll skew the data lower. In any case, don't be surprised if your true club distances aren't as far as you think. Try as I might, those 300 yard bombs in my mind never quite registered much more than 250!

I didn't expect much from Golfshot's electronic scorecard, but I ended up pleasantly surprised. It asks for your score, putts, the club used on the tee, location of the tee shot, sand shots, and penalty strokes for each hole. Once I became familiar with the input screen, I found it faster and more convenient to use than the old-school paper version. Once the scorecard is completed, Golfshot emails the scorecard and a link to the Golfshot website where you can view more detailed stats that are presented in useful charts and graphs. Very cool stuff.

So the question remains, can a smartphone golf GPS app take the place of a dedicated golf GPS device? For the vast majority of golfers, I say "yes" for the following reasons:
However, if you're a very serious golfer, you'll still want a dedicated golf rangefinder because of the military grade accuracy and the fact that most smartphones are not legal for tournament play.

P.S. If you're too cheap to drop $20 on a golf GPS app, try Swing by Swing.  Among the free apps, it's the best because there are no annoying ads.  But like all of the free apps, it doesn't offer much beyond distance to the middle of the green.