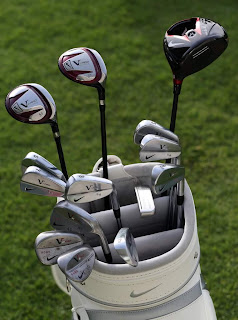 Many people noticed the chummy relationship Tiger was forging with Rory last year. Some speculated that Tiger was buttering him up to join Team Nike. Well, the rumors and speculation were true as Nike announced last week that it signed Rory to a mega 5-year $100 million endorsement deal.

Rory is now bathed from head-to-toe in Nike apparel. Like a superhero donning a costume to shield his identity, Rory wears a costume covered in swooshes. But the surprising aspect of Rory's deal is the equipment. Usually a golfer of Rory's stature adopts a new manufacturer's equipment gradually so it doesn't adversely affect the golfer's performance on the course. After all, nothing is worse for a golf company than a golfer playing worse with its equipment for all the world to see. Tiger has followed that path with his deals with Titleist and Nike.

However, Rory has dived right into the Nike armory replacing all of his 14 clubs and ball with Nike's offerings. Whether it's supreme confidence or young naïveté, his move is certainly a bold one. It remains to be seen whether it was the correct move, but Rory's first outing with the new gear at last week's Abu Dhabi HSBC Golf Championship in many ways was a bit of a stumble. This is a tournament that he finished in the top-3 for the last 3 years. This year, Rory misses the cut due to wayward shots and putts. Predictably, he attributed his poor performance to lack of practice. However, the fact that Rory bailed out on his Nike METHOD putter in favor of his old Titleist Scotty Cameron after only one round of play is not a sign of confidence in his gear.

I hope that Rory figures out his new equipment soon and returns to his #1 in the world form. If he doesn't, he may join Johnny Miller, Nick Price and Corey Pavin on the list of great golfers who have had their careers derailed due to equipment changes.