Michelle Wie continued her impressive performance at LPGA events this weekend at the Fields Open in Hawaii. Michelle shot a solid 66 in the final round, just missing getting into overtime by a stroke. Wie finished 3rd, in front of some hefty competition including Creamer, Kerr, Gulbis, and Ochoa. Considering that Creamer is probably the hottest LPGA golfer for the last year, it's amazing that Wie continues to dominate her with a head-to-head record of 9-3-1! 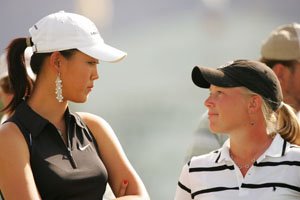 But more importantly, Wie also put that brat Morgan "The Pouting" Pressel in her place.

Pressel has been earning a reputation for being a loud-mouth, especially when it comes to the topic of Wie. After Pressel finished ahead of Wie at last year's U.S. Open, Pressel sounded off on Wie, "she's proven she can't win in pressure situations going into the final round...The biggest tournament in women's golf, she shoots 82...She falters at the end." Pressel continued her jealous-tinged shots at Wie after learning about the latter's endorsement contracts with Nike and Sony saying, "She's going to make something like $10 million? For what? For winning one tournament?!" The Wie-dissing surfaced most recently during a conference call for the Fields Open, when Pressel said that Wie should have to qualify for the U.S. Women's Open instead of getting an exemption.

Pressel is often compared to Dottie Pepper because of their similarly fiery personalities and body types. However, I don't recall that Dottie ever directed her animosity towards an individual for an extended period. Clearly Pressel has a lot of beef with Wie and there's no sign that she will let it go. To say that it's past tiring is an understatement.

Pressel had an opportunity to back up her words by beating Wie this weekend. She even got her wish to be paired with Wie in the final pressure-packed round. But ironically, it wasn't Wie that "falters at the end", it was Pressel. Wie spanked her soundly by 5 strokes. Just like any other spoiled little brat who doesn't get what they want, Pressel could only pout and cry about it...wah wah wah! Wie could have used this opportunity to take a shot at Morgan, but she took the high road saying, "She (Morgan) is a nice girl. She played good, kind of struggled a bit at the end, but she's a very talented player. I think she'll do really well this year."

Let this be a lesson to Morgan Pressel and the other brash and immature golf upstarts: just shut your trap and let your game do the talking. Oh, by the way Morgan, you are now down 1-3 head-to-head vs. Wie. Talking smack works a lot better when you have a winning record.

The boyz of the PGA are playing in my 'hood this weekend for the Nissan Open at Riviera Country Club in beautiful Pacific Palisades, CA. Opened in 1926, the course is well-known for the dominance of Ben Hogan. Over a span of 16 months, Hogan won 3 tournaments at Riviera. He won the 1947 L.A. Open, the 1948 L.A. Open and the 1948 U.S. Open. As a result, Riviera is also called "Hogan's Alley." Other notable winners at Riviera include Sam Snead, Byron Nelson, Tom Watson, Johnny Miller, Ben Crenshaw, Fred Couples, Davis Love III, Nick Faldo, and Ernie Els. But Riviera is also known for it's "Hollywood" club members. Some of those include Glen Campbell, Dean Martin, and Gregory Peck.

With all of this rich history, Riviera is considered a legendary golf course. This is especially true amongst LA-area golfers. It is one of the local courses that all LA golfers would die to play, but the majority can't because it's a private golf club. Luckily, I had the rare opportunity to play Riviera as a guest 2 summers ago.

I had circled the date of my Riviera tee time on my calendar weeks in advance like it was a major milestone in my life. The course already occupied a special place in my heart because it was the site of the first professional golf tournament that I attended as a spectator. Watching the pros play Riviera in person was one of the main reasons that I took up the game seriously. Needless to say, my expectations to actually play the course were astronomical.

But like that blockbuster movie that you've been dying to see for months, my expectations for Riviera grew to such lofty heights that only golf nirvana would have satisfied them. My actual round got off to a bad start when I learned on the famous 75-foot elevated tee of the opening hole that it's green was under repair. So the first green that I played at Riviera was a chalk outline in the fairway!

I knew that my round was bound to improve, but somehow it just didn't improve enough. I just couldn't help but think throughout my round that Riviera was like a really nicely manicured $25 green fee LA muni. I realize that it's sacrilege to write that, but that's truly how I felt and still feel to this day. Don't get me wrong, it's a nice course, but not one that blew me away.

I realize that my grossly over-inflated expectations ruined my Riviera golf experience. Since that time, I try to play all new golf courses with an open mind. I don't try to read up too much about a new course or ask people for their opinions. I've learned that, like many things in life, golf is usually best enjoyed free of hype and expectations. Remember this the next time you're invited to play Augusta National!

A Tip for Playing Golf from the Tips

Playing golf is fraught with mega-annoyances. One of the biggest is when high-handicap hackers feel the macho need to play from the longest tees, otherwise known as the "tips."

Isn't golf hard enough? I just don't understand why so many golfers want to make the game needlessly harder than it has to be. 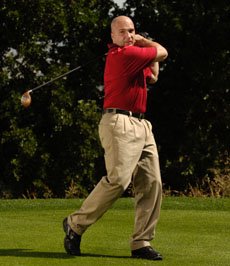 It's fine to be a sadomasochist on the golf course, but don't bring your pain to others. That's exactly what happens when hacks play from the "tips." It slows the pace of play down to a crawl. Even Ben Crane would be miffed.

I endured an especially trying round once when the foursome in front of me all played from the "tips." After the first 3 tee shots traveled a total of 100 yards at most, I rolled my eyes knowing that these clowns were going to make me late for my haircut appointment. As I was tapping my barber's number into my cell phone, a small sonic boom interrupted my call. It came from the driver of the 4th guy. He smashed his drive well over 280 into the fairway.

Over the next several holes, it became apparent that the foursome in front of us was comprised of the Italian Tiger Woods ("ITW") and the 3 Stooges. The handicap difference between the ITW and the best Stooge must have been at least 25 strokes. While I was irked that there were 3 hacks playing from the "tips," I was more annoyed at the ITW. Of all the people on the golf course, the ITW should know that his playing partners shouldn't be playing from those tees. It was obvious that they all knew each other, so there's no reason why the ITW couldn't have told them to play from the shorter tees.

The more I thought about it, the more I became incensed.

I realized that the 3 Stooges probably didn't know any better. They were so bad, they must have just started to learn the game. In such a case, it's the more experienced golfer's responsibility to teach proper golf etiquette to the novices. The ITW knew that their foursome would be holding up play and he just didn't care. In addition, the ITW made the game less enjoyable for his partners because of the additional difficulty. But even worse, the 3 Stooges will believe that they should play from the "tips" every time, perpetuating the problem.

If you're not sure which tees are appropriate for your skill level, for the sake of mankind (or at least the golfers who play after you), please ask the starter. If one isn't available, most score cards indicate the handicap range appropriate for each tee position. I'd write more, but I'm just too friggin' upset right now to continue... 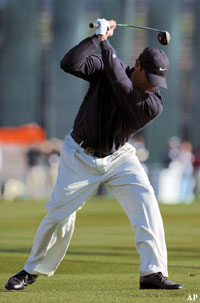 Many people give grief to golfers who show a little frustration out on the golf course. These golfers are often quickly written off as jerks or hotheads who taint the gentlemanly game of golf. Take Pat Perez. At the 2002 AT&T Pebble Beach National Pro-Am, Pat led by one stroke with 5 holes to play. But after two balls ventured out-of-bounds and one splashed into the Pacific, Pat exhibited a display of rage that included F-bombs, club slamming, and attempts at shaft snapping. As a result, the public crucified him for his behavior and he has had to live with it ever since.

But to anybody who's ever played golf, Pat's reaction is understandable. He may have gone overboard, but as golfers, we can sympathize with the maddening amounts of frustration that this seemingly simple game can heap onto a person. If there is anything that can bring out the worst in a person, I am convinced that it is golf. 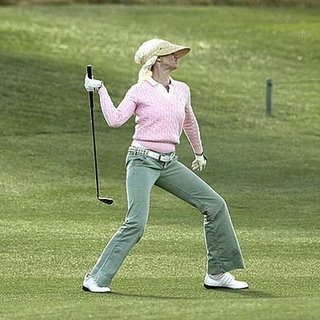 Not even celebrities are immune. The Golf Gods do not favor even the rich and beautiful. Cameron Diaz experienced this first-hand on a recent golf outing. Apparently, Ms. Diaz has taken up the game to spend more quality time with her golf-nut fiance, Justin Timberlake. The Boy Band frontman showed some serious game at the Bob Hope Chrysler Classic earlier this month with a smooth serenity reminiscent of his music. Cameron, on the other hand, played the game quite differently with several bouts of maniacal rage. I guess that's what happens when you can hurl your club farther than you can hit the ball. Thankfully, the paparazzi was there to capture the moment in pictures. So much for that carefully crafted public image!