Congrats to Tiger for winning the Buick Invitational on my favorite course, Torrey Pines. Unfortunately, the word has been out for a very long time as it is easier to win PowerBall than it is to get a tee time at Torrey. But there are many reasons why it still occupies a special place in my heart.

The Price - I've been lucky enough to play Torrey at the San Diego City resident rate. At these rates, it has to be one of the best deals in golf. The twilight rate is about $20 and you can easily finish 18 holes at twilight in the spring/summer. Unfortunately, the non-resident rates are quite steep. But you can't blame them. After all, Torrey is a muni course built for the residents of San Diego. Who wants their home course overrun by outsiders?

The Setting - I'm a native Californian, so I have a special affinity for ocean courses. Torrey is bounded by mountains to the north and the Pacific Ocean to the west. The Torrey Pines Tree is indigenous to this area and adds a unique touch.

The Courses - There are two courses, each with its own personality. The South is one monster of a course. From the tips, it is 7,607 yds. Probably the longest course I've ever played. The North is a much more reasonable 6,874 yds. and is more scenic. It's a much more enjoyable course for non-single-digit handicappers.

My Game - But the primary reason I love Torrey is that, for some reason, I've played my best golf there. I've played 4 rounds total on 3 separate trips and I each time I have played out of my head. The first time that I played Torrey, I played on the South course from the white tees (6,885 yds.). The day was marred by torrential rains and winds of up to 15 mph. However, I never played so well. Everything just clicked. I shot a 12-over 84, which might not sound so great. But considering the conditions (my friend Anth said par was probably 76 that day), an 84 was a great score for me. The next 3 rounds at Torrey were similarly fantastic. Why? I have no idea. It makes no sense, but what does in golf? Certainly not this golf blog!

Below is a picture of me at Torrey for the 1st time teeing off on the South's par-4 2nd hole. I remember that I crushed it 300 yds. (with a 15 mph tailwind!). Check out that storm coming in from the Pacific. 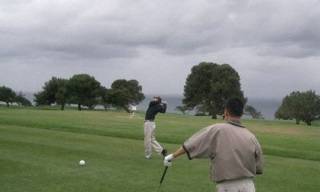 Even though Michelle Wie didn't play as well as people would have liked at the Sony Open last week, I think she's a legit future golf star. She's already shown that she has the game to compete at the highest levels of golf. 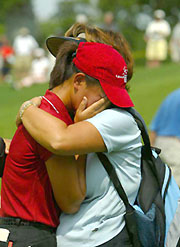 She just has to toughen up and stop crying after she plays below her expectations. Granted, she's only 15-years-old, but she needs that mental and emotional toughness to win in golf. It'll be interesting to follow her development, but if I hear or read another "cute" pun of her last name, I'm gonna go ballistic.

Here's just a small sampling of the headlines that I'm talking about: These guys are a barrel of laughs, aren't they? This stuff is digestable for the first couple of times, but this has been going on for over a year now. It's as overplayed as "shizzle my nizzle." It's like these writers just click on the "search and replace" function in their word processor and replace any hard "e" sound with "Wie." It may get so bad that wie'll all be doing this when wie write. Wiediculous, just like this golf blog.

I was flipping channels the other night to find golf blog topics when I came across a heated interview with Tom Kite. Instead of speaking about his chances at this week's Sony Open, he was expressing his great disappointment with the Bush administration and his disgust at the conservative slant of the Fox News Channel. I thought, when the heck did Tom Kite get so friggin' political. And isn't he a staunch right-winger like 99% of the american professional golfers?

Also, I found it peculiar that the interviewer kept addressing Tom Kite as "Al." Before I could check to see whether I had mistakenly taken a valium instead of my daily Vitamin C, my TV flashed the text, "Al Franken of the Al Franken Show" under Mr. Kite's mug. That explains it. Tom Kite and Al Franken are the same person! It's obvious when you see the pictures of these supposedly distinct individuals: 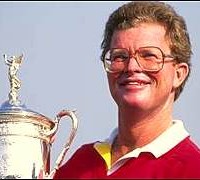 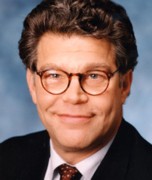 "Which is which?" you ask? Well, it really doesn't matter since they are one and the same. Seriously, have you ever seen Tom Kite and Al Franken together? It's the same reason why you don't see Nick Faldo and Harrison Ford together. Pro golfers are masquerading around as other well-known people.

Those who follow professional poker already know that Tiger check-raises under the name of "Phil Ivey" while Jesper Parnevik goes all-in under the alias, "Gus Hansen":

Some people think that John Daly plays as Chris Moneymaker, but I've never seen him smoke or drink at the table. No way he's Daly.

Have you seen any other of these golf dual-personas? Who knows, it could just be some Dave Pelz golf experiment gone awry...

Like most years, Santa doesn't really give me what I want. But at least I always have enough coal to last me through the winter.

This year, I decided to buy myself a new driver for Xmas. So I cruise over to one of my favorite online retailers, 3balls Golf

to have a look. This place specializes in golf closeouts, both new and slightly used (demo clubs). As a result, their inventory is constantly changing. So if you don't see anything interesting, check back in a couple of weeks. I've already bought several items from them and have been extremely pleased with the prices, accuracy of the item descriptions, and customer service.

Recently, they bought a ton of demo TaylorMade R580 XD and R540 XD drivers. Their selling price ranges from $109.50 to $149.50 depending on the model, condition, and shaft. If you recall, just a year ago these drivers were going for over $300 with the stock shaft.

But you can get an even better deal from 3balls.com. If you don't mind purchasing on eBay, you can find the majority of 3balls.com inventory there. So I went on eBay and won a 9.5° 540XD Driver with a Graphite Design YS-6 stiff shaft from 3balls.com for $100! Shipping was an additional $10. It was described as "fine" but it's virtually new.

Unfortunately, I haven't noticed a damn difference between this driver and my "obsolete" Ping TiSi. I don't think that I've gained a single yard nor am I hitting more fairways. Funny, I always thought it had to be the club and not me. Well, at least I'll have another club to blame the next time I play bad. Oh yeah, Happy Friggin' New Year!