Tiger Woods Just Can't Win - On and Off the Golf Course

In the November 26, 2004 issue of GolfWorld, Ron Sirak wrote an interesting article titled, "A Bad Week in Sports." In this article, one of the items that Mr. Sirak takes issue is Tiger's lack of attendance at Charlie Sifford's induction into the World Golf Hall of Fame. Charlie Sifford became the first African-American to join the World Golf Hall of Fame and so Sirak feels that Tiger should have been there to pay his respects. Sirak writes, "Tiger Woods should have been there. His videotaped message failed to make up for the fact he opted for a big-bucks appearance fee in Asia instead."

Well Ron, FYI, Tiger isn't entirely African-American. In fact, twice as much Asian blood courses through his veins than African blood. Tiger calls himself, "Cablinasian", to describe his Caucasian-Black-Indian-Asian racial composition. Does Tiger have an obligation to appear at every golf milestone achieved by a member of his racial group? That's just plain ridiculous. Last year, Hisako Higuchi was the first Asian golfer to become a member of the World Golf Hall of Fame. Funny, I don't remember Ron chastizing Tiger for not attending that ceremony.

There was once a time, not long ago, when professional atheletes were revered as great role models for young people. Larry Bird, Wayne Gretzky, Joe Montana, and Cal Ripken Jr. all exhibited excellent sportsmanship and behavior on and off the playing field. Unfortunately, such individuals have now been replaced with less than savory characters. From the sexual misbehavior of Mark Chmura and Kobe Bryant, to the pugilistic propensity of Ron Artest and Latrell Sprewell, to the murder accusations of Ray Lewis and Rae Carruth, there is moral void in sports today.

Golf is no different, but on a smaller scale. Arnold Palmer, Jack Nicklaus, Lee Trevino are some of the good role models of yesteryear. Likewise, they have now been supplanted with the meglamania and whining of Tiger Woods, the greed of Phil Mickelson, and the cheating incidents of Vijay Singh. 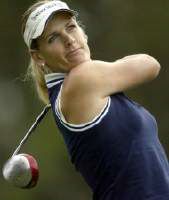 So where are the good athelete role models today? How about in women's sports? Mia Hamm, Lisa Leslie and Annika Sorenstam are good candidates. But then there's the case of Denmark’s Mianne Bagger. She or he, is the first transsexual to play professional golf on the Ladies European Tour. On second thought, maybe we should look for role models outside of professional sports...

I live in Los Angeles where playing golf can be an excruciatingly long ordeal. My guess is that an average round here takes about 5 1/2 hours. 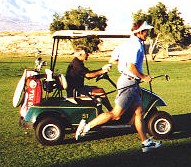 In my search for a solution to this problem, I've come across something called XTreme Golf. Basically, it combines running with golf. The objective is simple: Shoot the lowest score possible in the least amount of time. In XTreme Golf, competitors jog or run between holes and whack the ball with nary a practice swing. It's all about sharp skills, quick thinking and cardiovascular fitness (all things not needed to write a golf blog). All of this produces sub-hour rounds of golf.

I found some SwingVision pics of Briny Baird hitting an iron off the tee. He doesn't possess the greatest of swings, but these images illustrate how irons should be swung with the club approaching the ball on a slightly descending path. Notice that the hands are ahead of the ball with a bowed and supinated left wrist at impact and that the club strikes the ground after impact with the ball. These are fundamental concepts for proper ball striking. 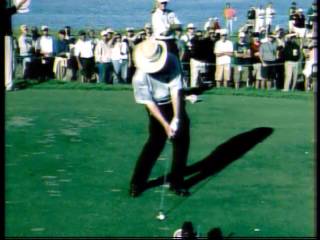 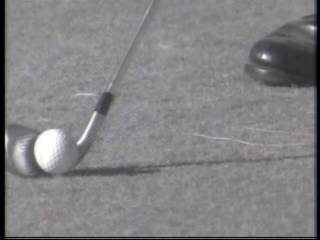 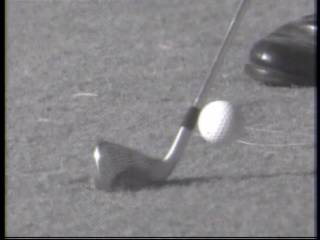 Vijay Singh Practices Hard. So What?

Congrats to Vijay Singh for shooting a 6-under 65 on Sunday to win the Chrysler Championship. It's his 9th win of 2004 and the $900,000 1st-prize made him the first in PGA Tour history to pass the $10 million mark in one season. Yes, he's playing great, but if I hear another golf commentator say that Vijay's the hardest worker in golf, I'll wrap my Cleveland lob wedge around his neck (or at least force them to read my golf blog).

Vijay may work harder than any other PGA pro, but so what? It's not like the guy is digging trenches for a living. He's playing golf. I think that if it were somehow guaranteed that you would play golf as well Vijay if you simply practiced as much as him, most golfers would jump at the opportunity. I know, sure as hell, that I would. Who wouldn't?

However, Vijay has never been a golfer that I've really liked. It's probably because I can never forget about his cheating and deadbeat past. It's funny how nobody ever mentions that Vijay was suspended indefinitely by the Southeast Asia Golf Federation for attempting to alter his scorecard at the Indonesian Open in 1985 in Jakarta. Also, does anyone remember Vijay being banned from playing the PGA tour in Australia because he failed to pay off his debts?

When you get banned from one professional golf tour, it can be filed away as a misunderstanding. But to get banned from two, that's almost criminal. If Vijay weren't playing such god-like golf, I wonder how long it would take for him to get bounced from the PGA Tour.

It's funny how attaining sports stardom can make heroes out of some of the biggest jerks.