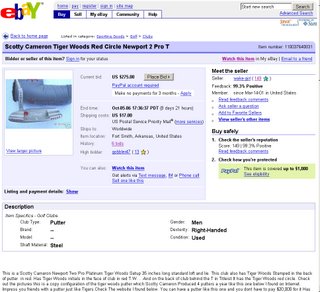 Anytime someone takes the time and effort to link to this site, I'm extremely appreciative. Well, at least that's what I used to think.

See it for yourself, if it's still available. It's an eBay auction entitled "Scotty Cameron Tiger Woods Red Circle Newport 2 Pro T."

From what I can tell, it's just a dinged-up Scotty Cameron Newport Two Pro Platinum not worth more than a C-note that's been doctored up to look like Tiger's Newport 2 303 GSS. 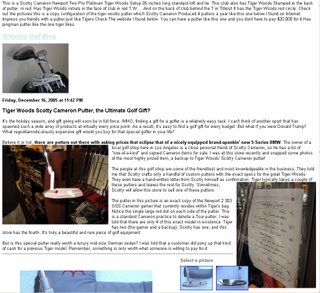 The putter face and the bottom of the putter are the dead giveaways. While this technically may not be a counterfeit Scotty Cameron, it is grossly misleading at best with the seller claiming that "This club is the same club that Tiger Woods used on tour." To those in the know, it is obviously not the Cameron putter model that is in the hands of the world's #1.

It is such a blatant fake that it is laugh-out-loud, rolling-on-the-floor hilarious. It kinda reminds me of those cheesecocks who modified their Pontiac Fieros with cheap-looking fiberglass body panels to make them look like Ferrari Testarossas. 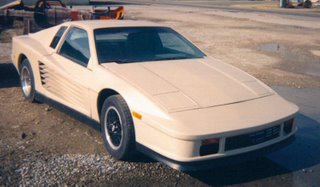 The 2006 Ryder Cup concluded this weekend as most expected. The European team delivered a complete shellacking to the American team. While the Europeans were favored, it wasn't even close.

Aside from being one of the most lopsided contests in the history of the Ryder Cup, the recent results highlight the problem with the future of professional American golf. 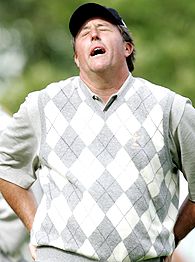 On the ladie's side, the American stock looks healthy with the likes of Paula Creamer, Morgan Pressel and Michelle Wie. However, the young talent on the male side has been paltry for a number of years. Sure, there's Tiger, Phil and Furyk. But after that, the talent drops off a cliff. As Johnny Miller puts it, "Seven of the top 30 in the world are Americans. That's unfathomable," he said. "I can't believe the state of the game in America. ... It's like you've got 12 guys - three of them are firing a 50-millimeter cannon and nine guys are shooting BB guns. The bottom line is, the U.S. has got to step it up."

Quite simply, there have just been a striking number of American male golf phenoms who never panned out. What ever happened to Ty Tryon and David Gossett Jr.? The other "young guns," namely Charles Howell III and Sean O'Hair, are good, but not exactly lighting it up. Outside of Tiger Woods, how many U.S. Amateur champs of the last decade are finding success on the PGA Tour? Ryan Moore is at least on the PGA Tour, but it remains to be seen whether he can ascend into the upper echelons. It's like the American golfer factory exhausted all of it's parts and craftmanship on Tiger Woods and then closed up shop.

So, are there any quick fixes for American golf's Y chromosome woes? I'd love to hear some ideas. Short of cloning Tiger Woods, I sure don't see any. As for the Ryder Cup, can we go back to how it was prior to 1979 when it was a contest between America and only the Brits?

Michelle Wie in PGA Tour Events? I'm all for it!

Last week, Michelle Wie made her sixth attempt to make the cut in a PGA Tour event at the 84 Lumber Classic. Like all of her previous attempts, she came up short. With each passing failure, more and more people are calling for an end to her exercise in futility.

However, I remain one of the few who wants to see Michelle continue to play in PGA Tour events. For one, I couldn't give a rat's arse about these tournaments if she didn't enter. 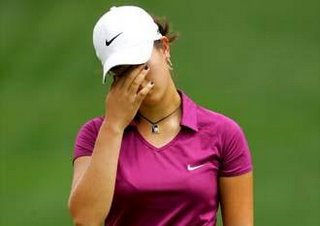 The John Deere Classic and the 84 Lumber Classic? These tournaments are anything but classic. Take away Michelle Wie and these events wouldn't even register in my consciousness. At a minimum, these events aren't any less interesting without Wie.

Second, it's not like Michelle is forcing herself into these tournaments. She is invited to play via a sponsor's exemption. Sponsors pay the big bucks and in return are allowed to give several spots in the field to whomever they want. If they choose to give a spot to Wie or Dora the Explorer, it's their prerogative. You can't blame Wie for accepting an invite. Heck, I'd accept any and all invites that were sent my way. If people don't want Wie in these events, they should take issue with the sponsors. But, since these "minor" events are the only ones that would invite Wie, who cares?

But the primary reason that I want Michelle to play in PGA Tour events is that they are tremendous money-making opportunities. Every time she tees it up against the men, bookies are accepting proposition bets on whether she will make the cut. At the 84 Lumber, my bookie was offering a money line of -800 on Wie missing the cut. In other words, you win $100 if you are willing to lay $800.

Sounds like long odds, right? But not long enough if you consider the real odds. The golf course at Nemacolin Woodlands stretches over 7,500-yards and hosts a strong field. Michelle Wie had an ice cube chance in hell of making the cut. But those are the same chances for any woman. According to Robert Allenby, "...if Annika Sorenstam can't make the cut at [the 2003] Colonial, on the course that plays shortest on tour, then no chick in the world is going to make the cut on this tour."

So, if you like easy money, you should support Wie's desire to play in PGA Tour events. The next time that she does, get yourself to Vegas or a local Ladbrokes and bet that she'll miss the cut. While you're at it, betting that Wie won't win a major next year is another sure bet. There's money for the taking!

A Postcard That We Can All Relate

There's a cool site that I visit on occasion called PostSecret.

I had been contemplating sending a postcard until I noticed that someone had already sent in a similar confession: 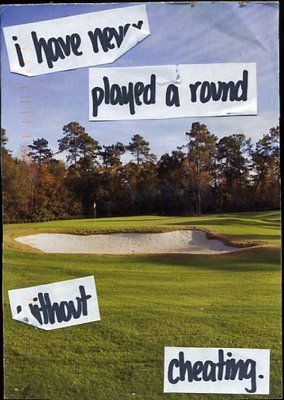 Initially, I thought that it may have been sent by Vijay Singh, but I ruled him out because he couldn't possibly cheat each and every time. Michael Bamberger would never allow that to happen.

In reality, it could have been sent by any of us weekend warriors. I can't think of a round where I didn't either pick up a gimmie putt, improved my lie, tapped down a spike mark, or took an improper relief. It's not that I intentionally cheat, it's that it takes too much effort to follow all the rules. Is it just me? What would you write on your postcard.

Well, I'm taking a break from labor this week, and that means this site as well. In the meantime, here are a few things to check out:

Also, I've updated my post of Darren Clarke's Swingvision Shank with the video. Although rare, even pros launch the dreaded hosel rocket. Even rarer is to capture such an event in slow motion! This video really is a must see! 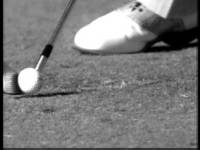 Hit 'em straight and see you next week.