Unfortunately, HDTV comes with a steep price tag. Even after several years of price erosion, quality HDTVs still command well over a grand. But at some point, you just have to bite the bullet. I did so recently and it put a serious dent in my wallet. But the pictures that it produces are amazing! As much as it cost, I think that it's worth it for the improved entertainment experience.

Sure, the amount of HD content is still relatively minuscule. However, it is constantly improving. Take golf HD programming, for example. It was pathetic just several months ago. Very few tournaments were broadcast in HD last year. It seemed that only the majors received the HD treatment, and even then, only the Masters delivered a high quality picture. But it seems to be different this year.

I was pleasantly surprised last weekend to find that CBS' first 2007 golf broadcast, the Buick Invitational, was broadcast in delicious 1080i HD goodness! In fact, all CBS golf broadcasts will now be shot and broadcast in HD! As a byproduct, my favorite slo-mo technology, SwingVision, is also now in HD! I'm trying to figure out where to get my hands on SwingVision HD videos for you to enjoy, but in the meantime, check out the photo of my Sharp Aquos HDTV displaying HD Swingvision via an antenna (click on it to expand): CBS has been leading the national broadcast networks in terms of HD picture quality. It used to be that if you wanted to show off your HDTV, you would tune it to CSI or a CBS HD NFL game (CBS will deploy 47 HD cameras for this year's Superbowl!). Now you can do the same by tuning it to a CBS golf broadcast. Let's hope that CBS continues the trend and that its competitors follow suit. If you're a golf fan and still don't own an HDTV, now may be a good time to jump on board. Nick Faldo in high def...does it get any better?

"This is a great finishing hole..."

I've heard that comment more times than not on the walk to the 18th tee.

Although there's no official definition, I've determined that the phrase "great finishing hole" means a final hole that is much more challenging than average. Usually it's a long par-4 that requires a long approach or a par-5 where there is a critical decision to be made on whether to go for the green in two because of some hazard.

Now that's great for golf spectators. A great finishing hole adds drama much like a surprise bikini model bachelorette does in "The Bachelor". You just have to watch and see whether the player has the cojones to go for it. 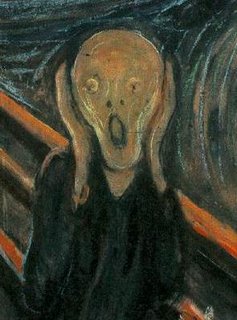 However, when I'm playing a round of golf, a "great finishing hole" is the last thing I want to see, especially when I'm scoring well. I can't tell you how many times my round has been ruined by a "great finishing hole". My home course features such a hole, a 450-yard thorn-in-my-side that features a narrow fairway bounded by trees on the left and a pond on the right. I can vividly recall over a dozen times when I needed a par or better on that beast to break 80. Of those times, I only parred once!

As a result, that hole has taken residence in the part of my consciousness housing such terrors as the Boogie Man, Freddy Krueger and Michael Jackson. Whenever I play my home course, the thought of #18 haunts my game from the get-go. When I hear the inevitable, "This is a great finishing hole..." from a playing partner, it just sends chills up my spine. To me, it is a "great finishing hole" because it's great at finishing me off!

I'm convinced that golfers are masochists. Saying, "This is a great finishing hole..." after spending 5 hours playing 17 holes is akin to saying, "I can't wait for the Cat o' nine tails" after being flogged with a cane for a good hour. If it's alright with you, I'd like to continue with the cane please. Thank you very much.

Michelle Wie recently announced her intention to attend college later this year. This is a relief to those who feared that the teen phenom would forgo college to become a pro golfer full-time. These people argue that the “college experience” teaches one invaluable life lessons in and out of the classroom that one can’t learn elsewhere. Even the great Tiger Woods said, “"I think you [miss out] on several things by not going to college, the most obvious being educational."

Such talk has prompted me to pause and reflect on the good ol’ college days. My alma mater happens to be the bitter rival of Stanfurd, the college that Tiger attended and the one that Wie plans to attend. While my college is superior to Stanfurd, I believe that my experience may shed some light on what Wie can expect from college.

I can recall those formative four years being exposed to such things as Keynesian economics, Nietzsche’s Übermensch concept and the Schrodinger equation of quantum mechanics. I toiled countless hours cramming these subjects into my head. Unfortunately, I have long ago lost the ability to recollect any specifics regarding these topics. Thankfully, there are many other things that I learned in college and will remain with me for the rest of my life. Here are just a few of them:
These are just a few of the precious things that Wie could experience from college. However, she can still chuck the idea and instead travel the world in first-class playing golf on the best courses while making millions of dollars. But why would she do such a silly thing?

I didn't have such an option, but I have successfully parlayed my college experience into a life filled with 60+ hour workweeks at a dead-end job where I’m bored to death trapped with other college-educated lackeys in a cold and sterile office.

It is often said that “the grass is always greener on the other side.” From my standpoint, Wie is standing in the greenest grass in the world. All I know is that I want to be on the side where the grass is in the fairway.