Will Tiger Ever Win Another Major? 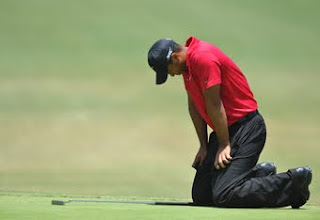 After many unTiger-like performances this year, the media has already written the guy off as a has-been. In fact, one writer has gone so far as to proclaim, "Tiger Woods will never win another major championship again." Any true followers of this maniacal game knows that this is ridiculously premature. Sure, Tiger has played badly this year. But isn't that entirely understandable? He's been the subject of one of the salacious scandals in sports history at a time when tabloid headlines rules the news. If that wasn't enough, he's had to go through a divorce proceeding that took away a major chunk of his massive change.

But to say that these major life-changing events somehow permanently erased Tiger's golf superpowers is just absurd. Tiger was still competitive in many of the tournaments that he played during the year. In my opinion, his swing looks great, maybe even better than before the infamous 2009 Thanksgiving Day crash. He just needs to get comfortable with new swing changes and return to form with the flat stick. It was obvious that this is the weak spot when Tiger switched putters for the first time in over a decade at the British Open. But Tiger has been one of the best putters in history and it's just a matter of time before his touch returns. Now that his divorce is finalized and the tabloids are moving on to the next flavor of the month, expect that time to come sooner than later. In fact, I confidently proclaim that Tiger Woods will win another major championship again!