VideoCaddy: The Worst Golf Gadget Ever? 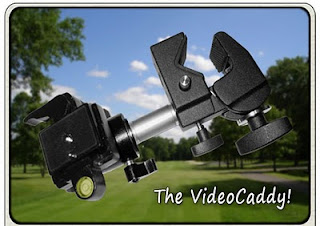 I love to play golf. I love to ride motorized golf carts. I love to record video with my video camera. Now there's a device called the VideoCaddy that let's me combine my 3 loves together. But why on Earth would I want to do that?

Well, someone thought that it would be a great idea. Unfortunately, it appears that the entrepreneurs behind the VideoCaddy didn't quite understand the concept of addressable market (the total potential market for a product). Did these guys do any market research whatsoever? Do they even know what that means?

Think for a moment about who would need such a device. Anyone who wants to videotape their swing would want to do it in a controlled environment such as the driving range. In that case, you'd want a dedicated tripod to ensure stability and flexibility. At a cost of $70 vs. a decent $10 tripod, the VideoCaddy is clearly a poor solution. But the makers of the VideoCaddy tout it's ability to record your swing on the course. But I ask, "Why?!" The pace of play is slow enough on the average golf course. Can you imagine playing behind some clown who's trying to record their swing? It takes extra time to position the cart, aim the camera, and work the camera. These kinds of ridiculous delays is a capital offense at my home course.

The only thing I see the VideoCaddy being useful is to tee up my video camera for all the golfers behind me that want to tee off on it for holding up play! If someone sent this to me for free, I'd toss it right into the garbage in knee-jerk reaction. However, the VideoCaddy might be interesting for collectors of rarities because I doubt they'll ever sell more than a handful.