While Tiger's swing seems to be improving, you've got to get a chuckle out of how ultra-sensitive he has become to any analysis of his swing. He now even has his caddy block cameras designed to record swings at PGA events. Obviously, Tiger's swing problems are embarrassing to him.

Not long ago, Tiger Woods welcomed such analysis. It was no coincidence that he was also swinging the club better than Iron Byron.

Do you remember when NBC affixed miniature cameras to the bills of NFL umpires' caps to show their individual viewpoint? 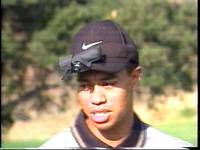 Well, someone had the brilliant idea to do the same thing to Tiger's Nike cap at the Williams World Challenge several years ago. Tiger jumped at the opportunity to show the world a perfect swing from a first-person perspective. Cleverly, the viewpoint was dubbed the "Eye of the Tiger."

It was one of the coolest golf broadcast innovations until SwingVision. Below are some screen shots of Tiger's setup with a 4-iron, 3-wood, and driver, respectively. Check out how the perfect setup should look: 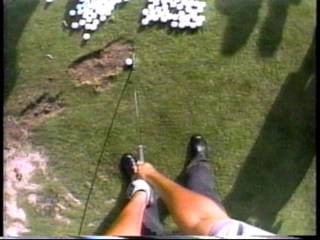 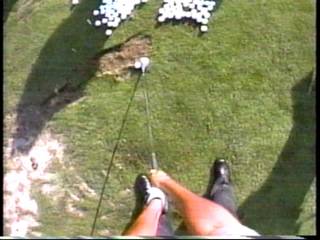 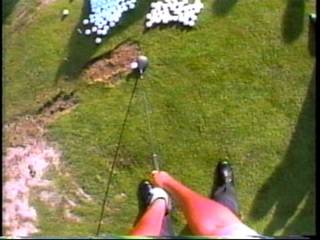 Here's the video of Tiger hitting the 4-iron:

Here's the video of Tiger hitting the driver:


Is this what you see when you address the ball? I would love to see the current Eye of the Tiger. Only I'm sure that Tiger won't let us. It's just a bit out of focus right now.

I wish they would bring it back, even with his faulty swing. The last time they showed it just watching Tiger's tempo ushered in a golden age for my game.

What the average golfer should get from these pictures is the huge pile of practice balls in front of Tiger... that he hits every day...

Tiger generates so much club head speed its sick. It's both a blessing and a curse. A blessing in that he hits every club in the bag farther than almost everyone on tour... a curse because his swing mistakes are magnified because of how fast his swing is.

Well done to Tiger and all the Tiger fans that stuck with him. Writing this in early 2008, it is now clear that his "improvements" have been exactly that, improvements.
Everyone who criticised him should probably take a look at themselves and ask why there thought they knew better than one of the greatest golfers in history about his own swing. The man is a legend, in future everyone should let him get on with what he's doing.

Tiger is the best ever to swing a golf club, now and for the forseeable future. It is my distinct privilege to witness such an athlete in my lifetime.
Kwikdraw

Blog is absolutely fantastic! All great information can be helpful in some or the other way. Keep updating the blog,looking forward for more content.