It was another unbelievable finish at the 60th U.S. Women's Open at Cherry Hills. Again, the USGA managed to make the best golfers in the world look like amateurs playing a corporate scramble event. 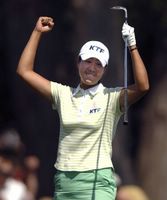 Sunday turned out to be a major choke-fest as the hottest names in women's golf fell by the wayside. Annika, Wie, Ochoa, and Creamer all crumbled under the U.S. Open pressure. One name on the leaderboard that I expected to blow up big time was the unheralded Birdie Kim. The only thing is, she didn't. She pulled a Michael Campbell and played clutch golf all day. She capped it all off by firing the only birdie on the 18th hole to win by 2 strokes over amateurs Morgan Pressel and Brittany Lang. Truly amazing stuff.

But the whole time, I just couldn't stop thinking about her name. I mean "Birdie Kim" sounds more like the daily special at my local Korean BBQ restaurant than someone's name. Was her Korean name really "Bo-Dee," but it was butchered into English by someone at Ellis Island? Were her parents just nuts? My mind was racing for a logical explanation. It turns out that her given name is Ju-Yun, but she changed her name earlier this year. She explained that "...there are a lot of Korean names in the LPGA. They all sound similar to mine, so I wanted something different, something simple and easy."

That sounds like a weak excuse to me. I think what actually happened was that someone once told her about the old adage, "you have to make a name for yourself." Somehow it must have gotten lost in the translation from English into Korean and she literally made a name for herself.

OK, that's fine to make your own name, but why the heck would you make it "Birdie"? What's wrong with "Jennifer", "Mary", or "Jane"? If you want to go more exotic, there's always names like "Madonna", "Angelina", and "Paris". According to Ms. Kim, "Birdie is good in golf and it's good for me. You get a good feeling when you make a birdie. Everything is nice. Everybody likes that name." Well I don't like it. In fact, I think that it's ridiculous.

The only good excuse that I can come up with for giving herself such a laughable name is that she made a deal with the Golf Gods. My guess is that they promised to bless her with golfing success if she changed her name to a golf term.

To some, that theory holds merit. Many golfers are so desperate to play well that they would change their name to something bizarre in a heartbeat if it would endow them with golf prowess. I just hope that this doesn't start a trend. Birdie Kim along with "Eagle" Inkster and "Albatross" Ochoa would make the LPGA sound like a wrestling federation.

I better take a careful look at my birth certificate. Based on my golf experiences, I have a strong suspicion that my parents originally named me "Bogey."

Early last week, I watched "Whale Rider" for the first time. The movie is set in New Zealand about a young Maori girl who becomes the leader of her people. I didn't think much of the movie, but I now know that it was really just the Golf Gods sending a message to me about the 2005 U.S. Open at Pinehurst. I mean, what are the chances that you watch a movie about a Maori rising above all odds and then several days later a real one accomplishes a similar feat at the toughest golf tournament in the world? Congrats to Michael Campbell on a masterful performance. But enough with the men, it's now time to focus on the ladies.

Annika Sorenstam has been dominating golf this year like no one else in the modern golf era. She is even eclipsing the supremacy of Tiger circa 1999-2000. Here are some of her amazing LPGA stats so far this year:
These are simply mind-blowing stats for anyone who plays a game as nutty as golf. The bottom line is that Annika is winning 75% of the tournaments that she starts.

Annika is now halfway through her quest to become the first woman to win the modern-day Grand Slam. She breezed through the first 2 majors of the year, leaving little reason to doubt that she won't continue likewise through the last 2 majors.

When I try to think of some names that could pose a serious threat to Annika, I draw a big blank. Unlike the PGA Tour where there are the "Big Five," the LPGA really only has the "Big One." There's simply no one else in the LPGA playing at the same level as Annika right now. 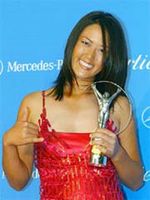 But I do think that someone outside the LPGA has a legit shot to upset Annika. That person is the amateur phenom, Michelle Wie. Quite impressively, the 15-year-old has two runner-up finishes in four LPGA starts this year. She came the closest to beating Annika at the most recent major, the McDonald's LPGA Championship. Michelle is playing her best golf and is primed for this week's U.S. Women's Open. While she has all the talent to rain on Annika's parade, she may not have the experience (nor the putter) to do it in a major. I can't wait to see how it all unfolds, but in the meantime, I plan to catch a flick or two. I'm really in the mood to watch a movie about a young Hawaiian that stuns the world. Any suggestions?

Right after the Masters, the U.S. Open is my favorite PGA golf tournament. The reasons are many, but they all boil down to making the greatest golfers in the world look like us, common everyday hacks. Who can forget last year's unbelievable playing conditions at Shinnecock? You couldn't get a golf ball covered in pine tar and tacks to hold the ridiculously hard and slick greens. When players finally did get their balls on the greens, they frequently putted them back off the green! 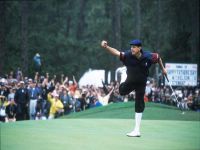 This year, the U.S. Open will take place at Pinehurst #2, the same location of the dramatic 1999 U.S. Open where Payne Stewart emerged victorious over Phil Mickelson. While the course appears open and forgiving, it proved to be a worthy U.S. Open venue.

Pinehurst #2 is a deceptively long 7,200+ yard par 70 track characterized by dome-shaped greens designed to reject golf balls much like the scalp of Golf World's Tim Rosaforte rejects hair (but the chicks dig it Rosie!). Scott Verplank called the setup of the greens "borderline sadistic." They drove John Daly so mental that he actually hit his moving ball in frustration after twice failing to putt his ball onto the 8th green. He ended up scoring an 11 for the hole, wrecking his chances after contending for 36 holes. It even got to mild-mannered Jose Maria Olazabal. After an especially maddening round, he pulled a Russell Crowe and broke his hand trying to poke holes in his hotel room walls with his fist.

But the USGA still doesn't think that Pinehurst #2 is tough enough. For the 2005 U.S. Open, the USGA plans to lengthen the course and increase the speed of the greens from ridiculously fast to regodamndiculously fast. All of this adds up to a golf course that only the Devil could conceive.

So who will tame this golf beast from hell? Whoever can do the following are good bets:

I guess all this means that Tiger will win the 2005 U.S. Open. But we all know about the absurdity of this stupid game. At 20-1 odds, I like the guy with the hottest wife on tour, David Toms. He fixed his wrist, dumped his agent, and is back to playing some great golf. Toms is a proven major winner with the total game peaking at the right time. If he gets in a zone, he could pull it out.

The baton for PGA television coverage will be handed off to ABC this weekend for the Booz Allen Classic. Actually, I'm more excited to watch the ABC broadcast team than the tournament itself. In my opinion, ABC Sports' coverage of the PGA has improved tremendously over the last year.

It seems to me that ABC has integrated some of the elements that have been successful for CBS' golf coverage. First, they have added life to their broadcast through wit and banter a la CBS' Gary McCord and David Feherty. This was achieved largely through the addition of former space smuggler turned golf commentator, Nick "Han" Faldo. Nothing against Curtis Strange, but Faldo is far more entertaining than his predecessor while exhibiting a similar genius-level golf IQ. Faldo manages to call it as he sees it with a healthy dose of dry British wit. Be sure to look out for his Bernhard Langer impressions. They are classic!

Second, ABC acknowledged the coolness of CBS' SwingVision with a copycat feature that they have dubbed "X-Mo." It is a super slow-motion feature like SwingVision. Unfortunately, it does nothing to one-up SwingVision. Why? X-Mo utilizes only one slow motion camera whereas SwingVision utilizes two - one to capture the full swing and one to capture a close-up of the club striking the ball. No doubt about it, SwingVision is still the king of slo-mo.

Anyway, here's a sample of X-Mo capturing the proper ball-striking with a sand wedge. Again, notice that the club strikes the ball first, then the ground. 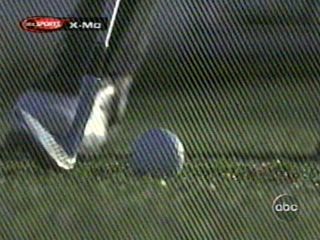 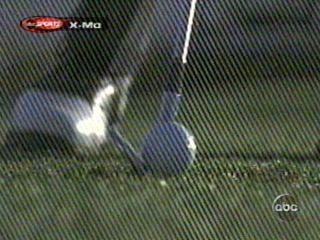 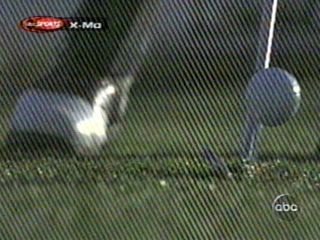 Line Up Your Golf Ball!

You may have noticed that some golfers draw a straight line on their golf balls to help them line up the ball to putt. It's even a common practice on the professional golf tours. If you saw Tiger Woods' miraculous chip shot at the 16th hole of the 2005 Masters on TV, you got a good close-up of his lined Nike One Platinum ball as it hung momentarily on the lip of the cup. 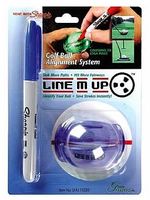 The most common device to draw such a line on a golf ball is a product called the "Line-M-up." It's essentially a piece of plastic that you snap on a golf ball. It has a slot where you can draw a straight line on the golf ball with a permanent marker such as a Sharpie pen.

While that may not sound like much to some, it's quite a lot for something that looks like it cost about 5 cents to manufacture. Sure, it comes with a Sharpie, but what does that cost, another 20 cents? Assuming a standard 100% retail markup, I estimate that the Line-M-up wholesales for about $4.50. To be generous, I'll assume that the Line-M-up costs a total of $.50 to manufacture and package. That means for each Line-M-up sold, the manufacturer makes $4.00 in profit, or a 800% profit margin!

I'm not against anyone making a buck, but to me this is grossly excessive. As a businessperson, I refuse to buy this thing based on business principle alone. But that doesn't mean I don't draw a line on my ball. For the price of a bottle of Gatorade, I have a ball line-drawing device.

When I wrote, "a bottle of Gatorade" I literally meant a bottle of Gatorade. I just use the plastic safety ring that detaches from the cap of a 20 oz. bottle of Gatorade as a straight-edge for golf balls. Amazingly, it fits on a golf ball almost perfectly! Not only do you have something to line your golf balls, but you also have a tasty beverage to wash down that crusty old hot dog that you bought at the turn. To ensure a straight and balanced line, use the Technasonic Check-Go to pre-draw the line. Just take a look at these pics to see how easy it is to "Line-M-up" ghetto style: 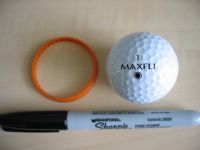 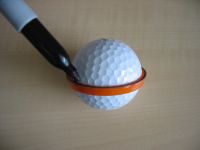 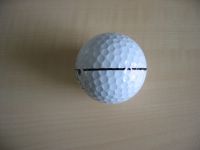