It's the holiday season, and gift giving will soon be in full force. IMHO, finding a gift for a golfer is a relatively easy task. I can't think of another sport that has spawned such a wide array of products at virtually every price point. As a result, it's easy to find a golf gift for every budget. But what if you were Donald Trump? What regoddamndiculously expensive gift would you buy for that special golfer in your life?

Believe it or not, there are putters out there with asking prices that eclipse that of a nicely-equipped brand-spankin' new 5-Series BMW. 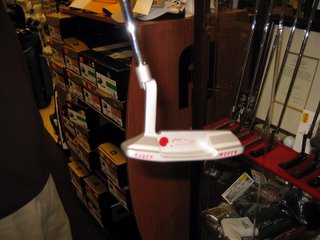 The owner of a local golf shop here in Los Angeles is supposedly a close personal friend of Scotty Cameron, so he has a lot of "one-of-a-kind" and signed Cameron items for sale. I was at this store recently and snapped some photos of the most highly prized item, a backup to Tiger Woods' Scotty Cameron putter!

The people at this golf shop are some of the friendliest and most knowledgeable in the business. They told me that Scotty crafts only a handful of custom putters with the exact specs for the great Tiger Woods. They even have a hand-written and signed letter from Mr. Cameron himself as confirmation. 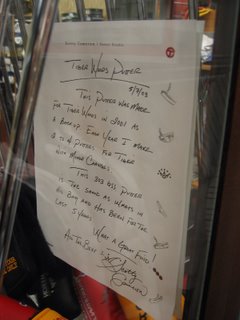 Be sure to click on the photo to zoom in and read the words written by the God of Putters himself!

The putter in this picture is an exact copy of the Newport 2 303 GSS Cameron gamer that has resided in Tiger's bag since the 1999 GTE Byron Nelson Classic. Notice the single large red dot or "cherry bomb" on each side of the putter. This is a standard Cameron practice to denote a Tour putter. It appears that there are only 4 of this exact model year in existence. It's truly a beautiful and rare piece of golf equipment.

But is this special putter really worth a luxury mid-size German sedan? I was told that a customer did pony up that kind of cash for a previous Tiger model. Remember, something is only worth what someone is willing to pay for it. 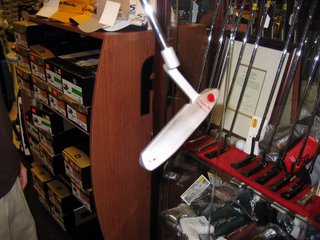 But this is just one of the 14 clubs that fill Tiger's bag. Steve Williams must be carrying sticks worth many times more than their weight in gold. I wouldn't be surprised to hear that Stevie lugs around a bag worth more than several million dollars on his back. I just hope he read about my post about golf club thefts.

To anyone who may be considering giving me a Tiger Woods' club as a gift this holiday: I think that I'd rather have a bimmer...

But if you are seriously interested in buying a rare Cameron putter, make sure that it has been authenticated. Obtain the registry number and enter it at the Scotty Cameron Registry to verify its authentication! If you have any more Cameron-related questions, just ask my friends over at The Cameron Collector. They are the real experts!

I'll let your secret santa know you'd rather have the bimmer.

Is it really hard to imagine that a rich golfer would drop a few grand on Tiger's back-up when average golfers are dropping a couple hundred on a putter? Golf is thick with guys who can't wait to separate themselves from their hard-earned cash.

You can have the car...I'll take a piece of anything Woods related anytime. PS: great site, I've added you to my blogroll. Found you via the hottie at Blogger Leaderboard!

As someone that knows the owners of that store...and has had that putter in his hand at one point...I can tell you that there ARE people out there willing to pony up $50K for that putter.

what store is it?

Email me and I can tell you.

Do you know if that Tiger putter is still on the market and if so, which LA store is it at?

Buyer beware!!!. If you buy a "Scotty Cameron" putter with changeable weights, and you send it back to the Custom Shop for a weight change, they will sell you different weights, then KEEP THE ORIGINAL WEIGHTS. If you want to resell the putter as it came to you, you would have to send it back to the Custom Shop, buy another set of original weights, each time with a cost of about $65.00.

Hello Golf Grouch,
I own a Scotty Cameron putter signed by Tiger Woods.
I picked it up at a Tiger Woods Foundation Block Party Charity Event in Irvine, CA. several years ago.
Great event, great charity!
Thinking of parting with it?
el porto