All the top pro golfers have their fair share of fans. However, most also have a healthy number of detractors.

Take Tiger and Phil, for example. Both deserve the respect of all golf fans for their golf achievements. In addition, each has legions of fans that love them for more than just their golfing abilities. Each has very different on-course personas that resonate strongly with their respective fans. However, the very things that people find appealing about these golfers are the same things that some people find objectionable.

Phil always projects a wholesome and care-free image on the golf course that the "Phil Phanatics" just eat up. Phil has become the modern-day Ward Cleaver to many casual golf fans.

However, some believe that Phil is simply putting on a show whenever he's on camera or in the public eye to maintain and maximize his endorsement dollars. In other words, Phil is smiling all the way to the bank. If you're a fan of Larry David's HBO comedy series, Curb Your Enthusiasm, you could guess what the F-bomb dropping, foul-mouthed Susie Greene might say about Mickelson: "That Phil is one phake phat phony phuck!"

On the other hand, many fans love Tiger because he is a fiery competitor who puts it all out on the golf course.

Much like Michael Jordan, he is intensely focused and never, ever quits. Tiger wears his emotion on his sleeves, good and bad. However, some find some of Tiger's behavior boorish and ungentlemanly, especially for the staid game of golf.

As a serious, but unaccomplished golfer, I am much more of a fan of Tiger than Phil. I appreciate Tiger's super-human golf ability and his ultra-competitive zeal. It's refreshing to see him upset over a bad shot as much as he celebrates a miraculous one. Anyone who plays golf knows that it is the most maddening game in the world, so it's somewhat comforting to see that the best player in the world shares our pain. In short, I find Tiger to be much more genuine than Phil.

Australian golfer Paul Gow has echoed similar sentiments when he said, "What you see on television is totally different to what he (Phil Mickelson) is around the clubhouse. Tiger (Woods) is the opposite: he will talk to you, he will sit down next to you at lunch and ask about your family and stuff. Phil is the opposite…He has done some great acting classes in Hollywood and they have worked out for him."

While it is clear that many people are not fond of Tiger and Phil, there is one golfer who everybody seems to love - Ernie Els. His peers love him, golf fans love him, and even grouchy people love him. His large frame and laid-back personality and smooth-flowing golf swing has rightfully earned him the nickname, "The Big Easy." Ernie is a big asset to golf, and his recent season-ending ACL injury was a tremendous loss. This year's PGA Championship was the first major since 1993 that Ernie has not played. He could have easily been the difference-maker at this year's evenly-played President's Cup. These great golf events would have been even better had Ernie been available to play. The good news is that Golfweek is reporting that Ernie will tee it up again as soon as this December. Oh, the miracle of arthroscopic knee surgery! Get well soon Double-E!

The Golf Gods Smile on Me

If you've played golf long enough, you'll know that there are supernatural forces that govern the game. There must be, because golf appears to be the easiest sport ever conceived. All you do is hit a small ball into a hole in the fewest amount of strokes. Unlike every other sport that I know, the ball isn't even moving before you hit it! How hard can that be?

Not only does the concept of golf sound easy, but it looks easy to play as well. Televised professional golf makes it look like anyone can play golf like a pro. Sure, there are the über-athletes that play golf professionally, like Tiger, but there are far more pros that look like they failed gym class more than once. Heck, Tim "Lumpy" Herron, Laura Davies, Pat Hurst, and Craig the "Walrus" Stadler look like they all came straight off a fat farm. John Daly takes it a step further by smoking between holes. If you don't need to be an athlete to play a sport professionally, how difficult can it be?

Well this is a case that supports the old adage, "looks can be deceiving." While golf seems laughably easy to the uninitiated, it is actually known as one of the hardest sports to master. Some argue that mere mortals can never truly master golf. Golfers know that it is really a game that defies all logic. It's no wonder that as many people quit golf as take it up in any given year.

Supernatural forces are the only logical explanation for the maddening nature of this godforsaken game. 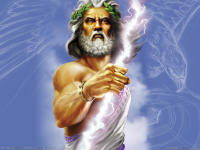 The Golf Gods monitor all things golf to ensure that it is always a challenge to us mortals. The God of the Slice is the most active and well-known member of golf's heavenly ruling body, but there is also the God of the Hook, the God of the Worm-Burner, and the most feared of all, the God of the Shank. They demand respect and are quick to strike down those who are irreverent.

But sometimes, the Golf Gods will bless us to keep our faith. Such was the case for me last week. For the longest time, the driver was my bread and butter club. I could hit a high percentage of fairways averaging a little over 250 yards. But about 2 months ago, I completely lost the ability to hit my driver. In fact, Rich over at eatgolf.com was an eyewitness to this inexplicable phenomenon. For the life of me, I couldn't figure out my driver and my driving game sunk to depths last reached by the Titanic.

But just when I was about to chuck my driver and the rest of my clubs into the Pacific Ocean, the Golf Gods intervened. Not only did they reunite me with my driver, they elevated my entire golf game. On my home course, Brookside #1, I began the day with a solid 3 over on the front nine. Miraculously, I shot even on the back to finish at a personal best of 3 over! It was one of those rare days when golf actually seemed easy. I hit 9 of 15 fairways and my misses still had a great lie and angle to hit the green. Likewise, I hit 11 GIRs and my misses were still in great position to get up and down. Putting is my usual nemesis, but even the God of the Yips smiled upon me. Not a single 3-Jack! My love for the game of golf was completely reinvigorated by the mercy of the Golf Gods.

As Michael Corleone said in The Godfather, Part III, "Just when I thought I was out, they pull me back in." Yes Michael, "they" are the Golf Gods.

If you've played golf long enough, your clubs will inevitably show signs of wear. Paint chipping off of golf clubs, especially forged irons, is one of the most common signs of wear. However, it is also one of the easiest problems to fix.

Recently, I wanted to fix some of my paint-chipped Mizuno MP-14 irons. But I wanted to do it the correct way. So I emailed Mizuno and asked them for advice in this matter. They promptly replied that I should try something called, "Laquer-Stik Fill-In Paint" by LA-CO Industries, Inc.

After some creative Googling on the Internet, I found that Laquer-Stiks are sold by The GolfWorks. They seem reasonably priced at just under 3 bucks apiece and come in colors commonly found on golf clubs.

According to GolfWorks.com, "Using any sharpened instrument like a dental pick or nail, carefully etch the engravings or stampings, removing most of the original paint. Next, rub the appropriate color of Lacquer-Stik (See Pg. 6-4 of our Full Line Catalog for the complete listing of colors) into the letter or number cavity. Wipe away the excess color and the results will amaze you -- it looks great!"

The nice folks at Rite-Mark Stamp Company offered to send me some Lacquer-Stik samples to try. I received a black Lacquer-Stik to try on my Mizuno MP-14 irons. Below is a before and after pic of the sole of my 6-iron that was completely devoid of paint.

While the product was very easy to apply, it doesn't cure to a rock-hard finish like paint. Instead, it stays somewhat flexible and malleable. While this is great for certain applications, it's not ideal for something that strikes the ground repeatedly at around 80 mph.

I've been playing with the Lacquer-Stik filled clubs and they seem to be holding up. However, I doubt that they will last very long. If they don't, I'll try another recommendation that was given to me by a clubfitter: Testors model paint applied with a toothpick. Right now, that sounds like the best solution. I've also heard that nail polish works well, but won't be seeing me buying anything at any MAC store.

P.S. I'll try to keep the "Golf Deals" section in the sidebar current. Be sure to check out the free Pinnacle golf balls offer. You can't beat free! Let me know if the offer has expired so that I can remove the link. I think it will go pretty quick.

Let's Help Our Friends in the Gulf Coast!

I'm on a golf blogging break this week, but I want to urge everyone to please consider making a donation to the American Red Cross 2005 Hurricane Relief Fund. This fund makes it possible for the Red Cross to help nationwide Hurricane disaster victims of 2005 with critical needs such as shelter, food, clothing, counseling and other assistance.

While the major U.S. golf organizations have created the U.S. Golf Hurricane Katrina Relief Fund to provide support to the relief efforts, I believe that funds will be utilized most effectively when contributed directly to the American Red Cross.

It's very easy to make an American Red Cross donation online. They accept amounts as little as $5 (less than 2 Pro V1s!), so everyone can afford to donate something. Or, if you don't play golf, sacrifice that half double decaffeinated half-caf, with a twist of lemon Starbucks Vente latte in favor of a donation!

In addition, my friends over at ResellerRatings.com and dealnews.com are offering to match American Red Cross donations through links on their sites. Please visit their sites for complete information, but here are the basics:
Please visit the American Red Cross at https://www.redcross.org/ for the most current disaster updates and stories about the people being helped. Thank you for your generosity.