Golf has been an interest of mine since childhood. My grandfather was a golf nut and he passed the bug onto me. However, I wasn't completely bitten. I enjoyed whacking balls at the range once in a while, but that was about the extent of my golf passion. 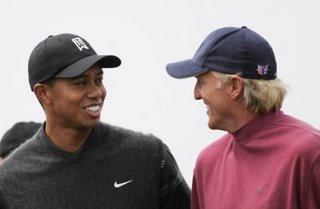 The simple truth was that chicks dug guys who played other sports, so golf naturally took a back seat.

Then in 1996, I was channel surfing on a lazy weekend and caught the final match of the U.S. Amateur Championship at Pumpkin Ridge G.C. I had heard of this golf phenom named Tiger before, and this was my first opportunity to see what all the hoopla was about.

I was instantly mesmerized by Tiger's perfectly textbook swing. I was in awe as he routinely drove the ball over 300 yards, an amazing feat at the time. However, his opponent Steve Scott finished five up after the morning 18 holes. With another 18 to play, it didn't look good for Tiger. But Tiger came roaring back with some truly incredible putting. It was one of the most exciting sports moments that I had ever seen. I was so inspired by Tiger's masterful and passioned performance that I dusted off my hand-me-down Hogan blades and persimmon woods and headed to the range.

10 years later I'm a certified golf nut. I play golf or watch it on TV whenever I get a chance. I subscribe to Golf Digest, Golf Magazine, and Golf World. As a self-taught golfer, I study golf instruction material like a PhD student. I research and experiment with golf equipment to eek out every possible performance gain. I write a freakin' golf blog for chissake! I can trace all this mania back to that one magical day in 1996 at Pumpkin Ridge.

Not only is Tiger Woods the reason that I developed a passion for golf, he was the main catalyst for golf's resurgence over the last 10 years. However, it seems that golf has been stuck in neutral lately. Greg Norman recently voiced his opinions on the subject. Surprisingly, he hints that Tiger is to blame! Is this just another case of a bitter old fart longing for the "good old days"? As a whole, I don't think that you can argue that Tiger hasn't been anything less than a boon to golf. People always prefer tigers over sharks anyway.

The following grouchy golf observation was submitted by an anonymous grouchy golfer. I think that all golfers can relate to his story. I sure know that Darren Clarke does!

A little background - I am a 4 handicap, and over the winter my swing had become "unorthodox". I started standing closer to the ball, with less hip sway etc. The changes were amazing and I started playing some amazing golf. I was getting under par during some rounds, but I was just having a little trouble scoring. No biggy.

Well a week ago it all suddenly went to the crapper. I showed up at the range one day before a round and hit hosel rockets with everything. I headed out to the course and it was as if they were not there. They came and went for a few more days. Then on Saturday, I shanked so many I shot 49 on the front nine of my home course. I came back with a 37, and thought they were through. Next day I hit a few more but nothing bad.

First day of my tournament came, on Monday. I was a little nervous about shanking, but nothing came up, and I was 1 over on the front nine. I hit some more lack luster irons on the back, but nothing major round, for a 43, and an 80. I was very disappointed.

Second day was yesterday. No range at the course so no warm up. I hit a 3 wood right down the pipe on the opening short par 5. I then heeled a 3 wood so bad off the deck it dribbled into the hazard about 30 yards ahead of me. I dropped, hit two shanks, and ended up with a triple bogey. Next hole I hit a driver so far off the heel. Punched out, and had 140 to the flag. I hit another shank, flubbed a chip, and three putter for a triple. I heeled another drive on the next hole, and had to lay up. I then shanked a gap wedge and made another triple. I started with 3 triples. Next hole I actually hit a somewhat flush drive, landed in a divot, hit into another divot next to the green made bogey. I then bogeyed the next par 3. I then made a par on a par 5. Then I made an 8 on a par 3, shanking a few O.B. I ended up with a 54 on the front nine. At that point I almost just through my clubs in a lake and walked in. I decided to forge ahead, and shot a shank filled 40 on the back.

I went and played today and was probably around 50 for nine holes before quitting. I am seriously thinking of just walking away from golf for the first time in my life. I am not having any fun right now.

Correct Shaft Flex: Stiff or Regular? Can You Handle the Truth?

One of the biggest equipment faux pas that golfers make is playing with golf shafts that are too stiff for their swing. Most of this can be directly traced to the golfer's ego.

Just like there are no men driving VW Beetles with those dainty flower holders, the macho factor won't allow male golfers to play anything less than a stiff flex.

However, it is important to understand just how shaft flexibility affects performance. After all, the shaft is often known as the "engine" of the golf club.

Theodore P. Jorgensen authored a book called "The Physics of Golf." He conducted several experiments to demonstrate that the shaft of the golf club during the golf swing actually bends forward at impact. Jorgensen provides a graph indicating that the clubhead lags behind the hands at the start of the downswing. However, by the time that the club is about horizontal to the ground, the clubhead catches up to the hands and eventually leads the shaft at impact.

This is counterintuitive to what most people believe. While all golfers acknowledge that the clubhead lags at the start of the downswing, most assume that it continues to lag until well after impact. Furthermore, it is commonly assumed that the more flexible the shaft, the more that the clubhead lags throughout the swing. Golfers assume these things because that's what it feels like during the swing. However, as with many things in golf, what you feel is not always what is real.

In reality, the shaft unloads during the downswing and kicks forward by impact, regardless of swing speed or shaft flex rating. Our hands simply cannot outpace the clubhead as the shaft unloads during the golf swing. In fact, the more flexible the shaft, the more that the clubhead will kick forward, increasing velocity and effective loft. Therefore, all other things being equal, softer shafts provide more distance and a higher trajectory than their stiffer siblings. This applies to all human-generated swing speeds, including that of Tiger Woods. Tiger himself acknowledges this phenomenon writing, "If I had weaker shafts I'd hit the ball farther just because there's more flex in the shaft and more kick in a regular-flex shaft than in the stiff shafts I use."

So why doesn't Tiger switch to "senior" flex shafts? While a more flexible shaft will provide more distance, the tradeoff is less control. It is simply much more difficult to control the clubface at impact with a more flexible shaft. The last thing that Tiger wants to do is to miss more fairways! For the rest of us, distance is probably our primary concern. Regardless, it is very important for us to play with the right flex for our unique swings. If you haven't done so already, I recommend that you visit your local golf retailer and receive a proper fitting. Finding the correct flex is fast, easy, and usually free.

Last week it was reported that Nick "Han" Faldo joined CBS Sports as its lead golf analyst. This is welcome news for anyone who was a fan of Faldo in the ABC booth and was concerned about his future when ABC bailed out on the PGA Tour. 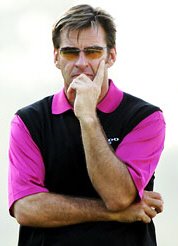 While adding Faldo to the CBS dream-team looks wonderful on paper, there's no guarantee that it will be a match made in heaven. Faldo worked out great at ABC because he injected a needed shot of humor into a broadcast team that was the television alternative to Ambien. Faldo also turned out to be a great foil to the usually serious but opinionated Paul Azinger. Both of them livened up ABC's golf coverage immensely.

However, Faldo will join a CBS team that's already the most entertaining in the business, chock-full of interesting and humorous personalities. David Feherty and Gary McCord are two of the funniest and wittiest sports commentators. I will always remember the time when I saw a pro hit an errant shot on a CBS telecast and then hearing Feherty quip, "Well, it looked good until he hit it." These are the kind of humorous comments that make CBS golf tops in my book. Will adding another funny fellow to the mix be too much?

Living in the heart of the entertainment industry, I have been exposed to the stand-up comedy culture first-hand. Surprisingly, it is a very competitive and cutthroat business where envy, jealousy and ego often turn comics against each other. Yes, comedians secretly want their fellow comedians to bomb. Sometimes, when these people are forced to work together, the results can be disastrous. Several casts of Saturday Night Live are proof of this phenomenon.

But if the chemistry is right, funny people can feed off of each other and produce great entertainment. The Howard Stern Show is one example where it keeps getting better every time they add a new cast member. While it remains to be seen whether the CBS golf team will improve with the addition of Faldo, can you really go wrong hiring someone with a Spinal Tap-esque British accent? Regardless, I can't wait to hear him comment about SwingVision. Also, it'll be interesting to see if Faldo mutters anything "offensive" during the Masters broadcast. Would the "Men of the Masters" dare banish a former Masters champion? I'm sure Gary McCord will take notice.