The following story was submitted by a grouchy golfer named Tom. Tom's tale involves a do-it-yourself golf club customization to one of the hottest drivers on tour, the TaylorMade R7 Tour Preferred (TP). Yes, it is possible to make this driver even hotter. Thanks Tom!

Ok, so here's something you don't see every day. My friend (his identity shall remain a secret, as I have promised him that) owns a TaylorMade R7 TP retail driver. While he likes the driver overall, he strongly disliked the tinny sound it made at impact. 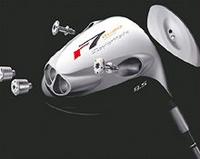 He decided to stuff cotton into the weight holes to try and deaden the sound. But after doing so, the cotton compacted, and he ended up with about 20 little pea-sized cotton chunks rolling around in his clubhead. It sounded like peanuts in a jar!

What he did next is the interesting part. He deduced that, since there was no way to retrieve the cotton pellets and cotton was flammable, it would be clever to pour a little gasoline into the weight holes and let the cotton soak it up. Then, he could light it and burn the cotton into noiseless ash. Here is where the trouble starts...

I think he poured a little too much gas into the holes because when he lit it, flames shot out about 6 inches from all four holes, scaring the living $hit out of him! He dropped the club immediately and it landed head first onto the driveway (at least he was smart enough to do this highly technical procedure outside), leaving big scrapes on the crown. When he thought that the fire was out, he picked up the driver by the head only to feel the sharp pain of hot metal searing his fingertips. In knee-jerk reaction, he dropped the club again, scratching up more of the clubhead!

After a momentary fit of rage, he collected himself and tried to think through the situation. He decided to play it smart and allow the club to cool off before he picked up the club. Staring at his nicked up baby, he wondered if he could buff out the scratches in the paint. Well, those concerns about scratches soon became irrelevant as the paint started peeling off the clubhead before his very eyes! It turns out that there was still a bit of fuel inside the clubhead that continued to burn as my friend waited for it to cool. The smoldering fuel heated the clubhead so much that it peeled off most of the paint!

But there is a bright side to all of this - the procedure to burn away the cotton worked, and there are now NO more rattles in the head!!! When he phoned me and told me this story, I just about peed myself laughing, which prompted him to hang up the phone on me. I will try to be more consoling in the future...

Golf Grouch Comment: That's one way to smoke your driver! Who knows, maybe an engineer at TaylorMade will read this story and turn it into the next big thing in driver technology: RPD (Rocket Propelled Driver). Tom, tell your friend that he'd better apply for a patent pronto!

How good is this guy at golf by the way? Hopefully better than he is with gasoline. Maybe he should've took all the money he spent on that driver and put it towards taking lessons?

that is so ridiculous that it has to be true. I do ask, however that your friend (however embarassed he may be) post a pic of the club just so that this article will be fresh when i tell people about it.

Not funny at all...
Not funny to laugh at the stupidity of your friend....

Your friend is a moron and he's lucky he didn't get seriously injured with that folly. He essentially made a bomb. And in this ridiculous lawyer driven country we live in, somehow it would have been Taylor Made's fault and he would have won millions in a pathetic lawsuit. And then the Drivers we buy would come with a sticker that reads " Do not pour gasoline into weight holes"

Tell him next time to just pour some MEK (Methyl Ethyl Ketone) in there - it will completely disintegrate the little cotton balls and then he can just pour out the MEK and leave the hole open for 30 minutes or so to make sure the remaining MEK evaporates - no flames, no problem!

Lol, great story. I'm just not sure if I feel more sorry for your friend or the driver!

Great story. your friend is definitely eligible for The Bad Golfers Association.
My brother ended up with a dozen stitches when he tried to change his "soft" spikes. Gonzo golf lives.
---The Commish