Hottest Golf Product? You Gotta Be Kidding Me

I was talking to a salesman at my local on-course golf shop. I asked him what's currently the hottest seller in the store.

Fully expecting him to say, "the TaylorMade R7," I was shocked when he replied, "the Epoch tees." 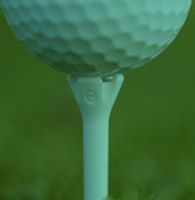 The salesman handed me a package and gave me the 411. He said that he's been getting calls from all over the country to purchase these tees. Supposedly, Evolve Golf's Epoch golf tees offer the least resistance of any golf tee, resulting in longer and more accurate drives. He said that Ping uses them exclusively during product testing.

I just can't believe that any golf tee would make a material difference to anyone's driving distance, from Tiger all the way down to my lowly self. Really, how much resistance can a tee impose? I mean, does a traffic cone slow down a Mac truck flying down the road at 80 mph?

I just don't buy it. And at $5 for a package of 16 Epoch tees, I doubt that I'll ever buy 'em. Nonetheless, they're still selling out faster than Corey Feldman or Playboy mags in a post-Saddam Iraq. I guess it just goes to show that golfers will pay almost anything to get that extra millimeter of distance. Maybe I'll just take a file to my outdated but free wooden tees and make 'em myself!

Brad and Jen of Golf? 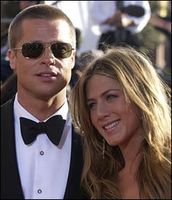 On Valentine's Day and in the aftermath of the inevitable breakup of Brad Pitt and Jennifer Aniston, I got to thinking - Who are the Brad and Jen of golf? After several seconds, I concluded that there were none. In fact I couldn't come up with a single couple from pro golf, period. Not now, not ever. Tennis has their Agassi/Graf, but what about golf?

Well, I think that there are several reasons why golf would never have a high-profile couple. First, the pro golf tours are virtually year-round with the men's and women's tour events at different sites. Therefore, it's almost impossible for the men and women pros to socialize in a consistent manner.

Second, just take a look at the players on the pro golf tours. Put it this way, if ABC wanted to do a special golf version of their hit show Extreme Makeover, they'd have enough candidates to last several seasons. I envision the first season of Extreme Makeover: Golf Edition, from Bogeys to Birdies to feature Laura Davies, Pat Hurst, Meg Mallon, Tom Kite, Craig Stadler, and Tim "Lumpy" Herron. In the sports world's natural selection process, golf occupies the same place as bowling.

Yeah, there are some attractive pro golfers. But they are very far and few in-between. Natalie Gulbis is the only chick that comes to my mind. Maybe J-Ro, but she looks too much like an ex-girlfriend, triggering panic attacks whenever I see her.

I guess if Gulbis were to somehow hook up with Adam Scott, golf would have a couple to be proud. But as we all know, those chicks always go for NFL guys. I guess the PGA guys will just have to stick with each other's nannies and the occasional groupie. As for the LPGA, do men actually attend their events? I don't know where the LPGA players find their dates, do you?

"Tee it high and let it fly" is a golf saying that's been around for a long time now. However, it's never been more apropos than it is now.

With modern driver heads expanding faster than Kirstie Alley, teeing it high is now a necessity just to make contact with the ball in the conventional manner. However, the majority of new drivers are also designed to work best when hit high on the face. So, the ball needs to be teed even higher. According to Bob Thurman, director of R&D at Wilson Golf, "Even though center hits generate a slightly faster ball speed, the distance is greater when the ball is hit higher on the clubface. Hitting it above the center of the face really improves your launch angle and really gives you a much better spin rate."

Another advantage of a high teed ball is that it encourages an ascending swing path. This is the proper angle of attack with the driver to maximize distance. Check out these SwingVisions of Vijay Singh. He tees up the ball a full 2.4 inches for the driver: 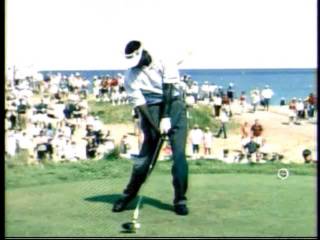 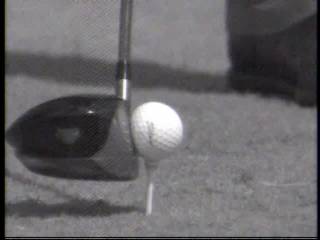 Can You Beat David Duval at Golf? 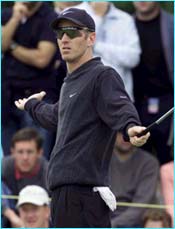 A couple of years ago, that question would have elicited a hearty laugh from anyone not ranked in the top 10 on the PGA Tour. And for good reason. Not long ago, Duval was the indisputable #1 player in the world and was kicking Tiger's A-Game arse.

Now, that very same question will strike a pause when posed to any single-digit handicapper. Some will answer a confident, "Yes."

How? Well, after Duval won the 2001 British Open, a combination of injuries, equipment changes, Hank Haney swing advice, family changes, and withering confidence sent his game into a downward spiral of despair. Sadly, his game sunk to unbelievable depths last week at the easiest PGA tournament, the 2005 Bob Hope Chrysler Classic. In this event, amateurs play with the pros for 4 rounds, so the course is set up for scoring. However, it didn't help Duval. He played poorly from the start, shooting 6-over on his opening nine holes to end up with an 82 in his first round. Unfortunately, that wasn't his worst round of the tournament.

When Duval started the third round with a birdie, things looked on the up and up. But after making the turn, his wheels didn't just fall off, they flew off faster than Pam Anderson's top at a nude beach. Somehow Duval shot 13-over on the back nine including 4 triples! I'm no stranger to triples, but I can't remember the last time I had 4 of them in a round, let alone over 9 holes. For a pro, one triple in a round is an anomaly. Two is awful. Three is gawdawful. Four is a mortal sin. But four in a half-round is just unheard of. I doubt Tiger shoots 4 triples total in an entire year.

Duval finished his 3rd round with an 85, close to 17 shots over the course average of 68.8. Remember, this is the same tournament where David shot a 59 in 1999 (on the more difficult PGA West Arnold Palmer Private Course). Can you imagine getting 26 strokes worse in 6 years? This is indeed a wicked game that we play...