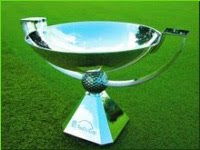 I don't know about you, but I could care less about the FedEx Cup. I know that they made some major changes this year to avoid last year's debacle where the winner was decided before the final event even started (a disaster many people including myself saw coming)! However, there are still many issues that still make this series a bore-fest.

I consider myself to be a reasonably intelligent person having earned a graduate degree from a prestigious institution of higher learning. And yet, I still can't comprehend the new and supposedly simplified FedEx Cup points system. I've heard all the golf talking heads on TV try to explain it, but it has yet to sink in. I've tried to read articles explaining it, but I just can't get past the 3rd sentence. If I can't understand it nor have the motivation to do so, isn't there still a huge problem?!

I've already suggested changes to make this thing more interesting. But is the FedEx Cup even necessary? I'm content with 4 majors and a team event as the major events in a golf season. So far, the FedEx Cup doesn't feel any more important than your run-of-the-mill PGA Tour stop. Maybe it's a hopeless case anyway since football takes priority for the majority of sports nuts at this time of year. Regardless, I know that it's bad when I'd rather watch my beloved, yet pathetic Oakland Raiders and our QB JaMarcus Russell throw to the other team than Tiger cashing in another paycheck.

I think the Fedex cup is lame too, but I think it works to the extent that the best players all show up. Otherwise Tiger and Phil would blow off these end of the year tournaments. 4 straight weeks of Tiger, Ernie, Phil, etc. is awesome, even if it's under the lame pretense of the Fedex cup. Consider it an appearance fee for the top players.

Well if the bug players turn out they must be doing something right.

I agree, in that I can't ever seem to get into the Fed Ex cup.

But I thought of this recently, so maybe this might help explain these feelings for others: by the time you get to the tour championship, you have the top money winners on tour fighting for $10 million. I say again: you have the top players, the guys who have made a crap-load all year (at the end of 2009, 125th on the money list was still like $650k), fighting over $10 million.

I don't know about you guys, but that's just exactly what I feel like watching: millionaires fighting over millions of dollars. Might as well get some yuppies in a jello-wrestling pit.

The only way I could see it getting any better is if you had to play in a minimum number events throughout the year (something extensive), and made the "points system" equal for each event, with no weighting considerations for bigger events. That way, it would be a dogfight to the end, and you'd get some crazy names potentially getting into the mix. Guys who could probably do a lot more with $10 million.