Last summer, I played a round at Angeles National with Rich from Eatgolf.com. We were paired with an older man and his son. Mid-way through the round, the son started to offer Rich some equipment advice. He believed that Rich's drives were too low and he recommended that Rich play with a driver with more grooves to impart more backspin. Upon hearing this, I just grimaced. I had recently read about the topic of grooves on the Internet and I knew that his advice was flawed. As a person who hates to hear bad advice, I felt the need to interrupt. I remarked, "Actually, I've read that grooves on a driver clubface don't add a lick of spin. 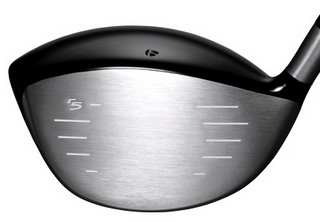 Just look at the new TaylorMade drivers. They don't even have grooves in the contact area." Everyone just looked at me dumbfounded.

According to equipment guru Frank Thomas, "...the grooves on a driver do nothing with regard to ball spin." In fact, some studies have shown that grooves on a driver can actually decrease spin. Pat Ryan Golf wrote about the findings of Art Chou of Chou Golf Design Labs and Deshou Liang of Drexel University. They discovered that a smooth faced club at low loft angles (less than 20 degrees) produces more backspin than a rough surface.

So grooves on drivers don't add spin. But how about other clubs? Surely, grooves make a difference, right? Yes, just not in the way that most people think.

According to Paul Smith:

The backspin is created by the balls compression on the clubface. This occurs between the time of impact and the moment of separation from the clubface. The clubs swing path and type of head rotation sees the ball mashed into the clubface. The loft presented to the ball distorts it in shape and gives us the launch angle and all of its backspin. The ball does not actually ever ride up the clubface, instead it gets imbedded in the face where the groove lines reside. High-speed photography has proved this. The more loft the greater the backspin.

Therefore, the grooves have zero influence on the launch angle or backspin on the ball. Well known club designer Ralph Maltby built a set of irons with no face groves at all and played with them extensively to prove this point to disbelievers.

Also, in the mid 1980's the USGA undertook extensive groove type testing and concluded that in dry conditions it was loft, not grooves that put backspin on the ball.

So what good are grooves then? Rather like car tyres which work perfectly in the dry, we need them to work in the wet as well. Clubfaces without grooves work fine in dry conditions but with water and grass in the way, the grooves allow some of the trapped materials to be moved from the collision zone. Without groves you may get a high flyer with less spin and in this instance the ball does in fact run up the face - it actually skids up the face on the lubricating water and/or grass.

The Sand Trap offers a similar explanation saying, "The main purpose of grooves is to collect dirt, grass, and water, thus increasing ball/steel contact." So if grooves aren't the primary producers of spin, then how do those pros on TV hit those high-spinning shots? Frank Thomas explains, "pros produce high spinning shots by striking the ball cleanly with a descending blow on an oblique angle..." In other words, perfect ball-striking.

Is this any different for square grooves? Johnny Miller seems to be leading a crusade against square grooves because Tiger and the big guys can get the same spin out of the rough with square grooves that they get from the fairway.

A square groove of the same depth as a triangular groove has more area (volume, technically) and thus can get more dirt, water, etc. out of the way, thus increasing ball/steel contact.

Interesting. So in dry conditions, there technically really is little to no point in cleaning those grooves, is there? Great! One less thing to worry about. :-)

That's why grooves are especially important in rough where there is bound to be some foreign material between the ball and clubface. The more volume of foreign material that can be evacuated by the grooves, the better.

Your posts are not helping my new Zen philosophy Grouch. Equilibriums and the launch physics are hurting my 'be the ball' mantra.

Hey I remember that G! Grouchy totally stepped and was all "nope; the grooves on drivers are purely cosmetic.." and this elevated to like a friendly heated debate because the guy just couldn't grasp that. Grouchy was fresh off reading all about it and was spitting off references and specifics. It was awesome. I remember they finally agreed to disagree. Then at the end of the round Grouchy got in the last word and says to the group of us "COSMETIC" :)

I looked it up that night and from what I understand, grooves are like treads on a car tire - they just give the water a place to go, or in a golf club's case the smashed grass juice or whatever. Since a driver has the ball on a tee, no grass, no moisture, grooves do nothing.

We'll have to play again this summer G that was fun. I might still have that guy's email address somewhere :)

I don't think I had looked at the face of my driver is a long time. Now according to that last paragraph I don't have to worry about any spin...ever!

But I don't see why groove doesn't generate backspin.

In the real world nothing is really "perfect". Off-center hit, slow head speed, lack of loft, sand, water, and grass all come into pictures in day-to-day play.
Thus groove is definitly nessasary on all clubs other than drivers, and don't you see those off-center grooves on r5 clubface?

(Vijay played #1 driver from rough
or even on the fairway at one time, I'm sure he was hoping there are grooves on the sweetspot also!)

I had seen my friend used a special wedge set with rubber club face. Those things produced crazy spin on any lies, even from bunker!
Well, it is definitely illegal, but let's say it is the ultimate form of grooves.

So back to the beginning of the story, the older man's son is probably right in pointing out that Rich need more backspin to help controling the trajectory of his driving. He might be 100% correct if he recommended Rich to add loft to his driver and choose softier ball.